BALTIMORE, June 20 (UPI) -- Prosecutors and defense attorneys wrapped up their closing arguments Monday in the trial of Baltimore police officer Caesar Goodson, who has been charged in the death of Freddie Gray last year.

Goodson is the officer who drove the transport van following Gray's arrest on April 12, 2015, during which medical investigators say the 25-year-old sustained the severe spinal cord injury that would ultimately lead to his death a week later.

Prosecutors have argued that Goodson drove in a rough manner that allowed Gray to be tossed around inside the van, unbuckled.

In fact, prosecutors argued that Goodson actually intended to injure Gray -- knowing the chances of harm were high for a handcuffed, shackled arrestee who's not buckled into a seat belt -- and failed on at least four opportunities to secure him, as per department policy.

Prosecutors also allege that Goodson denied Gray medical help when he needed it, which is also a violation of the department's procedural rules.

The defense countered by pointing out that none of the city surveillance video that captured portions of the drive showed Goodson driving in such a manner -- and called a fellow arrestee who was also inside the van to testify that it was actually a "smooth" ride.

That same arrestee, Donta Allen, told police after his arrest last year that he heard Gray banging his head on something. But at trial, he testified that he couldn't remember details of his transport because he was under the influence of drugs at the time.

Goodson's lawyer, though, said the evidence clearly shows that his client interacted with Gray as officers are trained to -- and that it was Gray who placed himself at risk by moving around in the van during transport.

The defense also argued that Gray was belligerent, which contributed to his injuries. Prosecutors, though, said he had only "passively resisted" -- a comparison that even drew scorn from Baltimore City Circuit Court Judge Barry Williams, WBAL-TV reported Monday.

Williams will now decide the case, not a jury, because Goodson elected for a bench trial. His verdict is scheduled for Thursday.

Goodson, 46, is charged with second-degree murder in Gray's death, but two medical experts called by the defense questioned the official manner of death -- homicide.

Last week, though, the lead detective in the case testified that assistant medical examiner Dr. Carol Allan had previously said Gray's was a "freakish accident" that "no human hands could cause" -- an assertion in conflict with the pathologist's testimony at trial, in which she stated that Gray's death was a homicide.

Attorneys were barred from speaking to the news media outside of court.

Six Baltimore officers have been charged in Gray's death, which sparked outrage nationwide. All have pleaded not guilty. One of the officers was acquitted in the case last month. The rest are scheduled for trial later this year.

If convicted, Goodson could be sent to prison for more than 30 year on the murder charge alone.

U.S. News // 4 hours ago
One-two punch of wintry storms to soak California through early next week
A pair of storm systems will slam into the West Coast in the coming days, bringing the return of wet weather to California. 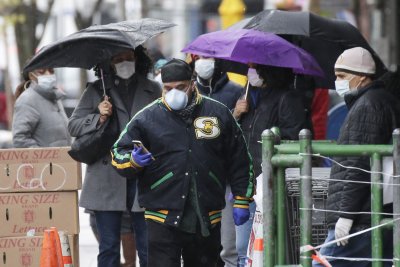