'We are Orlando': Hundreds gather at gay rights landmark Stonewall 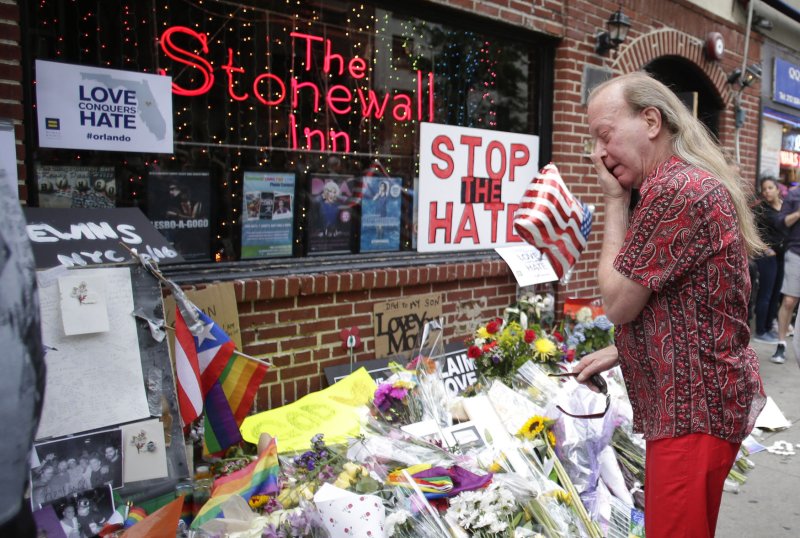 A man wipes tears from his eyes while looking at a memorial for the victims of the mass shooting at an Orlando, Fla., gay club outside of the Stonewall Inn on Monday in New York City. Thousands gathered in solidarity around Manhattan's historic Stonewall Inn to express their support for the victims killed at Pulse nightclub in Orlando. Photo by John Angelillo/UPI | License Photo

An attack at the Pulse nightclub in Orlando early Sunday by a man wielding an assault rifle and a handgun left 49 people dead and 53 injured. Formal and informal responses around the world have included universal condemnation of the act and the formation of vigils at churches, parks and other public places.

One such meeting was Monday evening, 1,000 miles from Orlando at the Stonewall Inn in New York's Greenwich Village. In 1969 gay patrons of the unassuming bar fought back violently against routine police raids with spontaneous demonstrations and unwillingness to meekly accept arrest for simply being there.

"The Stonewall Riots" are widely considered the start of the gay rights movement and Monday's vigil, which featured speeches by prominent elected leaders, reinforced the bar's reputation as a place to gather, in celebration or in solemnity.

"I can remember the days when cops were raiding this place," William Drummer, 91, told The New York Times. "It touches my heart to see this kind of solidarity."

On a makeshift stage featuring an American flag, the rainbow pride flag and a sign reading "We Are Orlando," Cuomo said, "We passed gun control in this state. We outlawed assault weapons in this state. We know it can be done. Until we have a national policy, none of us are safe."

De Blasio said "We do not accept anyone who would sow division or hatred. We do not accept the notion of any of our leaders sowing hatred and division in the wake of tragedy, and that means you, Donald Trump."

He added that, despite the heavy presence of police, many in counter-terrorism gear, at the event, no credible threat similar to the attack in Orlando has been directed at New York City.

Stacey Lentz, co-owner of the Stonewall Inn, commented, "The LGBT community has survived so much before, from AIDS to hate crimes, and we're continuing to show that we're strong and love wins. Those victims could've been any LGBT person at any bar around the country, but gay bars have always been one place where we can feel free. We refuse to have that taken from us."