The fighter jet had just flown over the USAF academy's graduation ceremony in Colorado Springs, where President Obama delivered the commencement address Thursday. 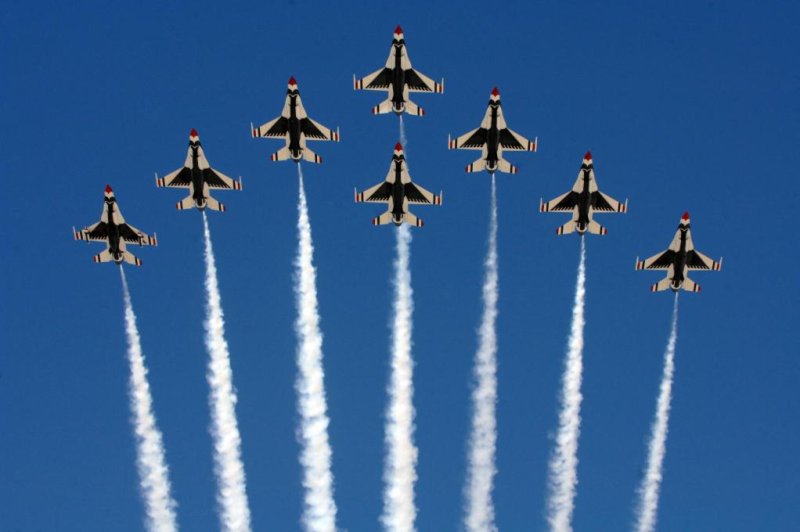 The U.S. Air Force Thunderbirds, a team of F-16 Fighting Falcons, flies in formation in this undated handout photo from the USAF. Thursday, the pilot of one of the jets was forced to eject after his plane lost engine power just moments after performing a flyover at the Air Force Academy's graduation ceremony in Colorado Springs, Colo. File Photo courtesy U.S. Air Force/Thunderbirds Public Affairs

COLORADO SPRINGS, June 2 (UPI) -- Just moments after punctuating the U.S. Air Force Academy's graduation ceremony with a flyover Thursday, one of the F-16 fighter jets involved in the stunt went down in a field after losing engine power, officials said.

Air Force officials said the lone engine on one of the F-16 Fighting Falcons, which are part of the branch's Thunderbirds flying team, suddenly failed after the planes completed the flyover. The pilot safely ejected and the aircraft ended up in a field near the First Baptist Church on Fontaine Avenue in Security-Widefield, less than 10 miles southeast of Colorado Springs.

"A Thunderbirds jet crashed in a field outside Colorado Springs after performing at the Air Force Academy graduation," the branch tweeted Thursday afternoon. "The pilot of the jet ejected safely and is walking around unhurt. More details will be released as they become available."

The cause of the engine failure is under investigation. The accident was the first of two Thursday involving U.S. military fighter jets. A Navy F/A-18 Hornet, a member of the Blue Angels flight demonstration team, crashed later in Tennessee, killing the pilot.

The Thunderbird F-16s have participated in the academy's graduation ceremony for decades but none had ever before suffered an in-flight failure at the event, which is often attended by the president of the United States.

President Barack Obama delivered the commencement address at Thursday's ceremony, in which he praised the graduating cadets and said, "Nobody matches America's Air Force."

The Thunderbirds F-16s are the same as those flown in military missions around the world, but are without some equipment to make the demonstration jets lighter and more maneuverable. The last crash involving a Thunderbird F-16 happened in 2003.

The F-16 Fighting Falcon, manufactured by General Dynamics/Lockheed Martin, has been in service with the U.S. Air Force since 1978. More than 4,500 have been built and the aircraft is also flown by various foreign militaries, including those in Israel, Iraq, South Korea and formerly Italy.

U.S. News // 13 hours ago
Attempted murder suspect on the run still using dating apps
Jan. 29 (UPI) -- A Nevada man accused of attempted murder and torturing a woman in Oregon is on the run and still active on dating sites, police say.

U.S. News // 17 hours ago
6 killed, more injured in New York bus crash
Jan. 29 (UPI) -- Six people are dead and another three are injured after a box truck and a bus collided head-on in New York.

U.S. News // 17 hours ago
Jewish family sues NYC's Guggenheim Museum seeking return of Picasso painting
Jan. 29 (UPI) -- A Jewish family has filed a lawsuit against the Guggenheim Museum in New York City seeking the repatriation of an iconic painting by Pablo Picasso that they allege was sold to allow the family to escape Nazi Germany.