On the issues: Presidential candidates have varying proposals to revamp VA

Presidential candidates Hillary Clinton, Donald Trump, Bernie Sanders agree reforms are necessary to correct problems in the Veterans Health Administration. An examination of their proposals shows they vary widely in how they would do it. Composite image of UPI photos

WASHINGTON, June 1 (UPI) -- With an influx of military veterans returning stateside from Iraq and Afghanistan, and in the wake of reports exposing massive bureaucracy in the U.S. Department of Veterans Affairs leading to poor care and, in some cases, the death of retired service members while awaiting care, all three presidential candidates have put forth detailed plans for how best to reform the system.

While Hillary Clinton, Bernie Sanders and Donald Trump agree in principle that there is a problem, their proposals for how to solve it differ widely.

Here is a look at the history of problems at the VA and how the 2016 presidential candidates propose to fix it.

Eric K. Shinseki, former secretary of Veterans Affairs, resigned from his post in May 2014 after it was revealed the VA was plagued by large backlogs of patients dying while waiting for healthcare. File Photo by Kevin Dietsch/UPI
Advertisement
RELATED On the issues: Student loan reform offers rare moment of agreement for candidates

The problems first bubbled up in 2014 at one VA hospital in Phoenix, but it soon became clear long waits and intentionally misleading records were a systemic problem within the Veterans Health Administration.

The central problem in Phoenix and up to 42 other VA hospitals: A backlog of patient requests overwhelmed the system, causing administrators to cook the books, leaving many patients off official lists in order to make it look like VA facilities were meeting federal guidelines for patient care, when in reality thousands of veterans were shut out.

In Phoenix alone, 1,700 veterans were intentionally omitted from patient waiting lists and placed on "informal" lists to prevent regulators from cracking down. The result: Official documents shows an average wait of 24 days for a patient to see a doctor, but subsequent investigations showed the real wait time averaged 115 days -- nearly four months.

Subsequent investigations by the VA inspector general found 35 of those veterans awaiting care in Phoenix died without having received treatment at the facility.

Subsequent investigations by the FBI, the Obama administration and Congress placed the number of vets left waiting or denied care at up to 120,000 nationwide. A Senate report released by Sen. Tom Coburn, R-Okla., estimated 1,000 veterans died while awaiting treatment at VA facilities since 2004.

Presumptive Republican nominee for President Donald Trump proposed allowing veterans to visit a doctor of their choosing if they accept Medicare as a way of clearing long wait times at VA hospitals. Photo by Bryan R. Smith/UPI

The Republican presumptive nominee proposes a simple, but significant reform when it comes to veterans' health care.

Trump would allow all veterans eligible for VA health benefits to bring their VA card to any healthcare provider who accepts Medicare and receive treatment.

One of the major problems exposed in the VA scandal was the wait time many veterans had to endure in order to see a doctor. In some cases, months went by before they were able to get an appointment.

Trump says diverting some veterans out of the VA system will cut down on wait times.

Another major problem is the inconvenience many veterans face in getting to a VA facility. Allowing them to seek treatment closer to their home could improve access to care.

Trump also says forcing the VA to compete with the private sector for veterans' healthcare dollars will require the agency to correct the long backlogs that would otherwise lead veterans to seek care elsewhere if they could.

Trump calls for "firing the corrupt and incompetent VA executives who let our veterans down."

Like his presidential adversaries, Trump is also critical of a VA policy that does not require every hospital to staff a full-time OB-GYN, calling it "an utter lack o respect for our growing number of female veterans." He proposes requiring every VA hospital to be "fully equipped" to address women's health issues.

The Democratic front-runner said the backlog of cases at VA hospitals can be fixed and avoided in the future by revitalizing the agency. Clinton proposes technological fixes, including better communication between the Department of Defense and the VA, to help VA officials better anticipate when surges in care requests might happen.

She also proposes increasing funding, simplifying the claims process and paying overtime to VA staff to help get the backlog that already exists under control.

She also points to the need for a "new Bradley Plan" to fundamentally retool the agency and make it better suited for the needs of 21st century veterans.

The original Bradley Plan was enacted by Gen. Omar Bradley, the VA secretary after World War II, and created much of the infrastructure in place now.

Her policy paper on veterans' affairs calls for creating a standing President's Council on Veterans to "to ensure the highest levels of government are fully involved and synchronizing their efforts to get veterans the benefits they've earned."

"I believe in making sure that people who sacrifice for us are given all the care and the benefits and support that they need. And I believe strongly that taking care of our veterans is part of our solemn duty as Americans."

Clinton also calls for revamping VA care options for women, saying the department needs to do more than simply hire more OB-GYNs. She calls for more gender-specific health services, daycare facilities at VA hospitals to help single parent veterans and requiring the full provision of "reproductive services" across the VA.

She also says soldiers who have suffered sexual abuse while in the military should be eligible for the same health benefits as those who suffer medical problems as a result of combat duty.

She calls for loosening security protocols to allow the Pentagon to notify the VA when a service member has participated in a classified or sensitive mission that could put them at greater risk for mental health issues, like post-traumatic stress disorder. 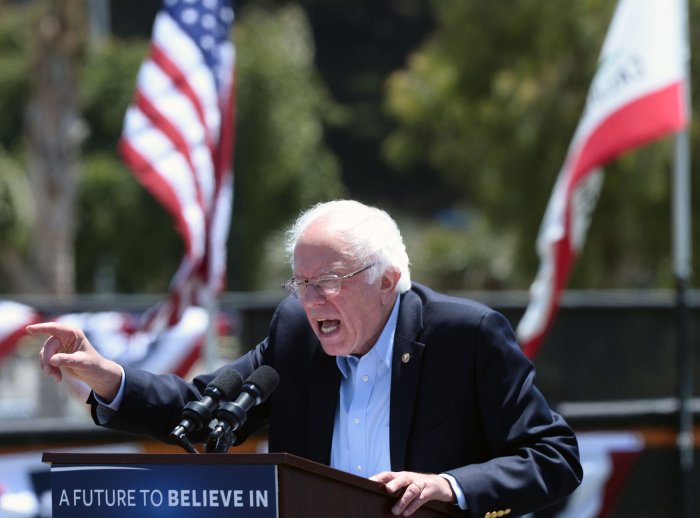 Democratic presidential candidate Bernie Sanders was chairman of the Senate Veterans Affairs Committee in 2014 when the VA's bureaucratic problems first came to light in 2014, and he helped write legislation to divert more funds to the department. Photo by Jim Ruymen/UPI

Sanders served as chairman of the Senate Veterans Affairs committee when the VA scandal came to light. When it did, he worked to write legislation that appropriated an additional $5 billion to the department to help address shortcoming in staff and infrastructure and cut down on wait times.

As president, he says he would "fully fund" the VA and increase programs included in the post-scandal legislation that offers financial incentives for young doctors to work for the VA.

While he stops short of Trump's call to open up veterans care to nearly the entire private sector via Medicare, Sanders does favor making it "easier" to allow veterans to see private doctors or go to community health centers.

Another provision unique to Sanders' plan would be giving comprehensive dental care available at all VA facilities.

As is the case frequently with Sanders' positions on various issues, income inequality is not far from his central view on veterans' health care.

"Instead of cutting benefits for the men and women who have served our country, we should ask the most profitable corporations and the wealthiest among us to pay their fair share," Sanders said.

U.S. News // 8 minutes ago
COVID-19 vaccine mandate kicks in for healthcare workers in 25 states, D.C.
Jan. 27 (UPI) -- Healthcare staff at all facilities and providers certified under Medicare and Medicaid must have received at least one dose of a COVID-19 vaccine starting Thursday. 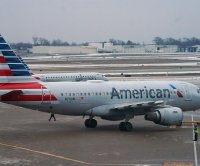 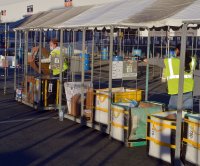 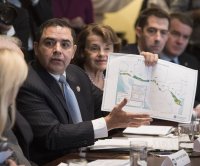