Sanders doubles down on Trump debate, angering some Dems

WASHINGTON, May 27 (UPI) -- Democratic presidential candidate Sen. Bernie Sanders appeared on a late night show Thursday, renewing his pledge that has drawn the ire of some fellow Democrats to debate Donald Trump.

Sanders appeared on Jimmy Kimmel Live one day after Trump, the presumptive Republican nominee, made headlines on the same program when he accepted Sanders' challenge to debate one-on-one.

Kimmel allowed both candidates to submit a question for the other during their back-to-back appearances. Sanders used his to challenge Trump to a debate, which Trump accepted on the condition the event was used to raise several million dollars for charity.

The possibility of a Sanders-Trump debate could widen the rift between Sanders and Democrats backing front-runner Hillary Clinton. Sanders stands little chance of winning the nomination because he trails Clinton significantly in the delegate count, but has continued campaigning aggressively against her. Seeking to elevate himself by debating Trump without Clinton has angered some fellow Democrats.

"Bullshit," was the response given to Politico by Sen. Joe Manchin, D-W.Va. "That confirms what we've been saying. Why would you expect Bernie should be considerate or be nice or be working to bring everyone together? Why? He's not a Democrat."

Sanders continued his push on Kimmel Thursday night, seeking to press the GOP's presumptive nominee into a one-on-one debate.

He thanked the host for making the debate possible.

"You made it possible for us to have a very interesting debate about two guys who look at the world very, very differently," Sanders said.

While the idea drew sharp rebukes from some in the Democratic caucus, other senators said the possibility of Sanders taking on Trump could only help the party's effort to defeat him in the fall.

"The more Donald Trump gets exposed in the context of public policy, the better it is for our country," said Sen. Claire McCaskill, D-Mo., told Politico.

U.S. News // 54 minutes ago
CDC issues travel advisories for N.Y., N.J., Conn.; no quarantine
March 29 (UPI) -- The Centers for Disease Control and Prevention urged residents of New York, New Jersey and Connecticut to avoid non-essential travel to prevent the spread of the coronavirus as U.S. deaths doubled to more than 2,000.

U.S. News // 2 hours ago
No fatalities but heavy damage to town in Arkansas
March 29 (UPI) -- City officials and residents in Jonesboro, Ark., are starting the recovery process after the town took a direct hit from a twister that left buildings flattened in its wake on Saturday. At least six minor injuries were caused by the twister and no confirmed fatalities.

U.S. News // 17 hours ago
Instacart shoppers to strike for better protection against coronavirus
March 28 (UPI) -- Employees who shop for Instacart, which allows customers to order groceries for delivery through a smart phone app, are planning to strike nationwide Monday to demand the company provide better protections amid the coron

U.S. News // 22 hours ago
SeaWorld to furlough most of its employees amid COVID-19 closures
March 28 (UPI) -- SeaWorld Entertainment has announced the furlough of more than 90 percent of its employees due to the coronavirus pandemic. 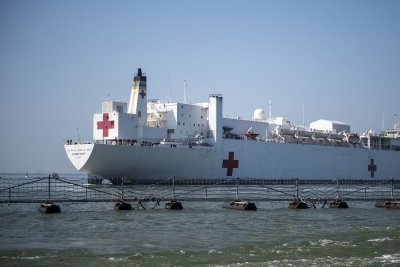