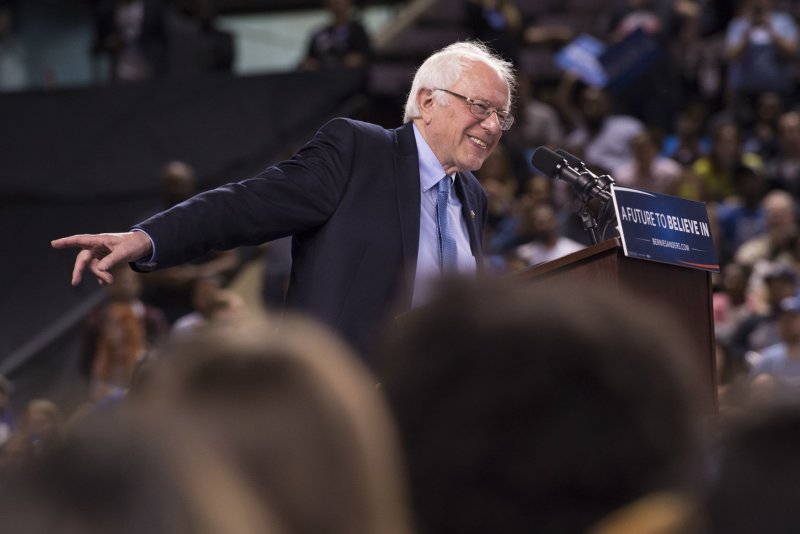 WASHINGTON, May 12 (UPI) -- Bernie Sanders' campaign manager said in a letter to potential donors that the Democrats "court disaster" if they nominate rival Hillary Clinton for president.

Jeff Weaver, in a fundraising appeal, wrote Wednesday, "The Democratic Party must decide if they want the candidate with the momentum who is best positioned to beat [Donald] Trump or if they are willing to roll the dice and court disaster simply to protect the status quo for the political and financial establishment of this country."

Although Sanders trails Clinton in pledged delegates and super delegates, Weaver said there will be a contested party convention in Philadelphia in July.

Polls found Clinton narrowly winning Florida and Pennsylvania -- within the 3 percent margin of error -- but losing to Trump by 4 percent in Ohio. Sanders would more comfortably win all three, according to the poll. Sanders performs better though they also are within the poll's margin of error.

"Because we must do everything we can to defeat Trump in November, our mission is to win as many pledged delegates as we can between now and June 14," Weaver wrote. "Then we're going to have a contested convention."

RealClearPolitics shows Sanders beating Trump more decisively than Clinton in the general election in an average of polls: 52-39 percent vs. 47-41 percent.

RELATED The White House won't be handed to Clinton

In a CNN interview Thursday, Weaver said the "disaster" he was referencing in the pitch was a Trump victory, and was not meant as a criticism of Hillary Clinton.

"The disaster is not Hillary Clinton. The disaster is the election of Donald Trump," Weaver said. "Look, electing Trump to the presidency of the United States would be an unmitigated disaster."

In an interview on WABC Radio's Election Central with Rita Cosby, Sanders said "his campaign is "fighting for the soul of the Democratic Party, whether the Democratic Party remains dependent on Wall Street contributions or whether we move in the direction that our campaign has [fought for]."

Sanders, who has won 19 states, trails in the total delegate count 2,240-1,473, including 524-40 with super delegates. A total of 2,382 delegates are needed to nominate. The next primaries are Tuesday in Kentucky and Oregon.

For the first time in 2016, Clinton's monthly fundraising total topped that of Sanders, with a haul of $26.4 million in April, campaign officials said Tuesday.

U.S. News // 1 hour ago
Judge finalizes verdict for Depp vs. Heard defamation trial
June 25 (UPI) -- A Virginia judge has finalized the verdict in the defamation case between Johnny Depp and Amber Heard after the former couple failed to reach a settlement.

U.S. News // 1 hour ago
Laundrie admits to killing Petito in notebook pages, calls it 'merciful'
June 25 (UPI) -- Brian Laundrie wrote in his notebook that he thought his killing of fiancée Gabby Petito last year in Wyoming was "merciful," pages released by his family attorney show.

U.S. News // 4 hours ago
Southwest showers, storms to keep fire risk at bay
While the rain will help dent the ongoing drought and keep wildfire concerns at bay, too much rain at once can lead to the opposite problem, with flash flooding a possibility.

U.S. News // 5 hours ago
Protesters react nationwide to abortion ruling, tear gas deployed in Arizona
June 25 (UPI) -- Activists took to the streets across the nation in the hours after the Supreme Court overturned nearly 50 years of federal abortion rights guaranteed under Roe vs. Wade.