Part of the reason for its decision, the Fed said, is inflation continuing to run below its 2 percent objective. 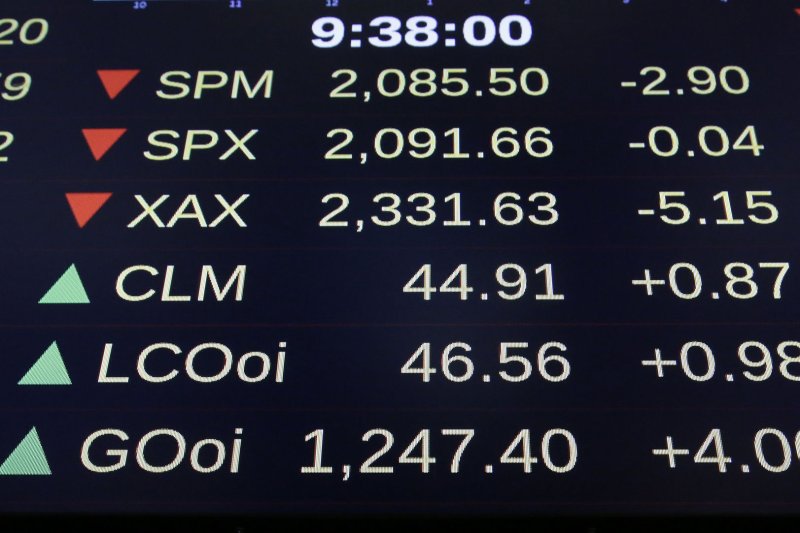 The price of gold traded up at the beginning of the day Wednesday on the floor of the New York Stock Exchange on Wall Street in New York City. Later in the day, the Federal Reserve announced it has decided to leave the benchmark federal funds rate unchanged. Photo by John Angelillo/UPI | License Photo

WASHINGTON, April 27 (UPI) -- After raising key interest rates for the first time in nearly a decade four months ago, the U.S. Federal Reserve opted to leave them alone during the board's meeting Wednesday, despite a continually improving labor market and consumer confidence.

The Fed previously said it expected to raise rates twice more before the end of 2016, based on economic conditions, but it apparently didn't see enough risk balance Wednesday to pull the trigger now.

"A range of recent indicators, including strong job gains, points to additional strengthening of the labor market. Inflation has continued to run below the Committee's 2 percent longer-run objective," the board said in its assessment Wednesday. "Against this backdrop, the Committee decided to maintain the target range for the federal funds rate at 1/4 to 1/2 percent."

The Fed cited inflation beneath its 2 percent objective, a gauge of domestic economic health, as one reason for leaving its benchmark federal funds rate unchanged. That level, it said, was partially due to recent "declines in energy prices and falling prices of non-energy imports."

Despite its summary, the central bank did not offer a detailed assessment of present risks -- the third time it has refrained from doing so -- something that has traditionally been a standard accompaniment to the Fed's meetings reports.

While the job market, household income and confidence have all improved, the Fed said other indicators of the health of the economy -- most notably general economic growth consumer spending -- don't look as strong.

"The stance of monetary policy remains accommodative, thereby supporting further improvement in labor market conditions and a return to 2 percent inflation," the committee wrote. "The Committee expects that economic conditions will evolve in a manner that will warrant only gradual increases in the federal funds rate.

"The federal funds rate is likely to remain, for some time, below levels that are expected to prevail in the longer run."

In December, the central bank raised interest rates for the first time since the financial crisis in 2008, but has declined to raise them further in its three meetings since.

Nine of the 10 board members, including chairwoman Janet Yellen, voted to leave the federal funds rate unchanged. The lone dissenter was Kansas City Fed President Esther L. George, who favored raising the target range for the rate to 1/2 to 3/4 percent. George was also the lone dissenter last month when the Fed similarly chose not to raise rates.