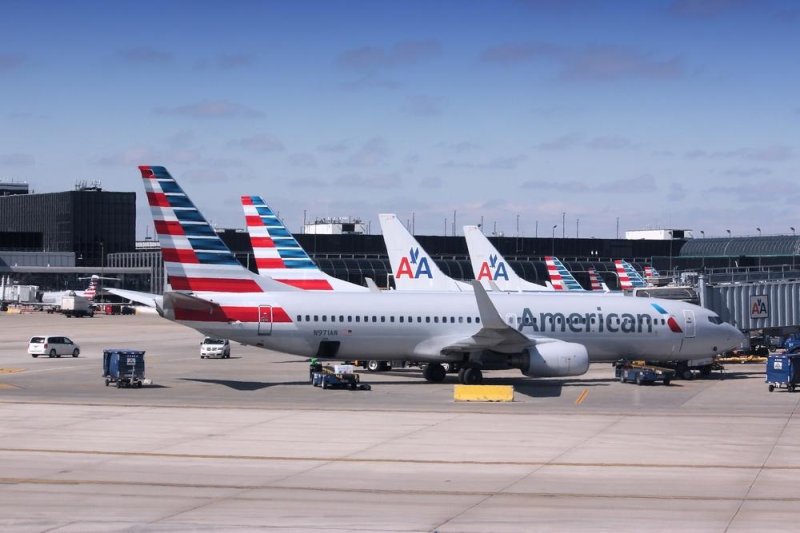 The arrest of an American Airlines pilot in Detroit on Saturday is the second arrest for the company in three weeks. A flight attendant was taken into custody weeks ago after allegedly starting a fire in an airplane bathroom. Photo by Tupungato/Shutterstock

DETROIT, March 26 (UPI) -- A flight from Detroit to Philadelphia was cancelled Saturday morning after the co-pilot was suspected of being drunk, according to officials.

The American Airlines co-pilot, who has not been named, was arrested after Transportation Security Administration agents noticed erratic behavior. The co-pilot allegedly failed one alcohol breath test by Detroit Metro Airport authorities and a second after being turned over to police, WXYZ-TV reported.

Airport police were called about 20 minutes before the 7:00 a.m. flight was scheduled to take off. At least one passenger posting a photo to Twitter of the co-pilot being taken into custody on the tarmac next to the plane. While the co-pilot's blood alcohol content was not released, an airport representative told ABC News it was over the 0.04 percent limit set by the Federal Aviation Administration.

"Safety is our highest priority and we apologize to our customers for the disruption to their travel plans," American Airlines said in a press release, saying they were working with local law enforcement, as well as accommodating passengers stuck at the airport, many of whom were on Spring Break.

This is the second arrest of an American Airlines employee in the last few weeks, according to NBC News.A 23-year-old flight attendant is accused of starting a fire in a plane bathroom.

U.S. News // 8 hours ago
Oklahoma schedules 25 executions to begin in August
July 1 (UPI) -- An Oklahoma court on Friday scheduled the executions of 25 men over the next two and a half years, cases that the prisoners' lawyers say "exemplify systemic flaws" in the state's use of the death penalty.

U.S. News // 10 hours ago
Biden predicts states will ban women from traveling for abortion
July 1 (UPI) -- President Joe Biden on Friday predicted some states will try to prevent women from crossing state lines to seek an abortion but pledged to protect women's rights to travel to seek such services.

U.S. News // 12 hours ago
Iowa family sues amusement park in death of 11-year-old in 2021
July 1 (UPI) -- The family of an 11-year-old Iowa boy who died when an amusement park ride malfunctioned nearly a year ago filed a lawsuit against the park and its managers on Thursday.
Advertisement