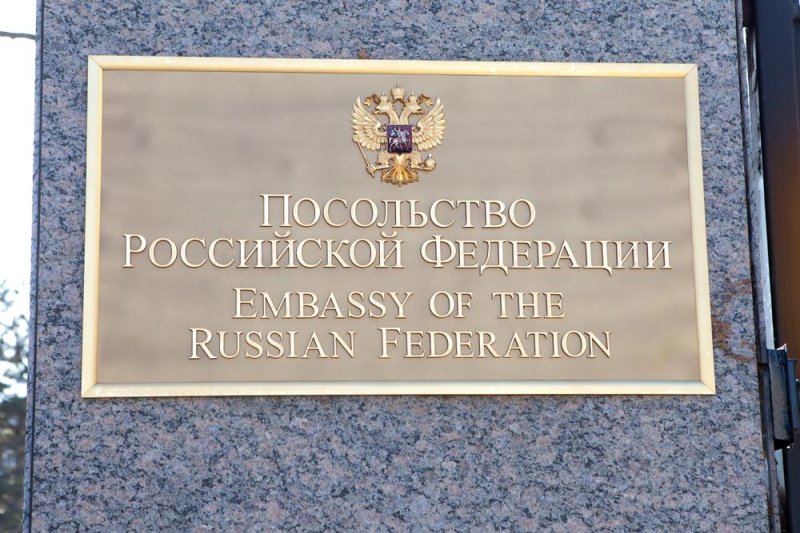 A Russian citizen who posed as an employee of a Russian-owned bank in New York City pleaded guilty on Friday to a conspiracy charge that accused him of working illegally as a non-official cover operative for Moscow's Foreign Intelligence Service. Photo by Mark Van Scyoc/Shutterstock

WASHINGTON, March 11 (UPI) -- A Russian citizen pleaded guilty Friday to a conspiracy charge for illegally working on behalf of Moscow intelligence in the United States, the Department of Justice said.

Evgeny Buryakov entered the plea in federal court in New York City on Friday, just weeks before he was scheduled for trial on the conspiracy charge, Justice officials announced.

Buryakov, 41, a pseudo-employee of a Russian bank in New York, conspired to work as a non-official cover operative of the Russian Federation without gaining prior authorization from the office of then-U.S. Attorney General Eric Holder four years ago.

The Justice Department said Buryakov began working as an agent for Russia's Foreign Intelligence Service in 2012 -- posing as an employee of the Russian bank Vnesheconombank while working as a NOC operative under the guise of private citizenship inside the United States.

Such non-official agents are permitted to operate within the United States, but are required by federal law to provide prior notification to the Attorney General. That did not happen in Buryakov's case.

"Foreign nations who attempt to illegally gather economic and other intelligence information through espionage pose a direct threat to U.S. national security," Assistant Attorney General John P. Carlin said Friday. "The National Security Division will continue to work with our law enforcement partners to identify and hold accountable those who illegally operate as covert agents within the United States."

If it sounds as if Buryakov was engaging in clandestine activity on U.S. soil, as you might expect to see in a Cold War-era spy movie, U.S. Attorney of the Southern District of New York Preet Bharara said, that's because he really was.

"An unregistered intelligence agent, under cover of being a legitimate banker, gathers intelligence on the streets of New York City, trading coded messages with Russian spies who send the clandestinely collected information back to Moscow," Bharara said. "This sounds like a plot line for a Cold War-era movie, but in reality, Evgeny Buryakov pled guilty today to a federal crime for his role in just such a scheme.

"More than two decades after the end of the Cold War, Russian spies still seek to operate in our midst under the cover of secrecy."

Buryakov also worked with at least two other agents of the SVR over the last four years, officials said. They were also charged with conspiracy but were not arrested because they no longer reside in the United States.

In January 2015, following Buryakov's arrest, the Russian government denied that any of the three were involved in gathering intelligence for Moscow during their time in the United States.

The Justice Department, though, rejects Russia's claim -- saying the agents were instructed by Moscow to gather intelligence on various matters, including potential U.S. sanctions against Russian banks and American efforts to develop alternative energy resources.

Buryakov, who will be sentenced May 25, faces a maximum of five years in prison.

U.S. News // 2 hours ago
Houston issues boil water notice; some schools to remain closed Monday
Nov. 28 (UPI) -- The City of Houston has issued a boil water notice to its millions of residents after water pressure in its main system dropped over the weekend, prompting several school districts to cancel classes for Monday.

U.S. News // 6 hours ago
Rescue mission underway for occupants of plane dangling from Maryland power lines
Nov. 27 (UPI) -- Authorities were working to extract a pilot and a passenger from a small plane dangling 100 feet above the ground Sunday night after it crashed into power lines in Maryland.

U.S. News // 14 hours ago
Storm with high winds, colder air to blast across Midwest, Northeast
More than 125 million people from the Midwest to the Northeast could face disruptive wind gusts from a powerful storm system from Tuesday to Wednesday.

U.S. News // 14 hours ago
Severe weather to threaten 25 million from Texas to Illinois
Approximately 25 million people in the south-central United States will be at risk for severe thunderstorms on Tuesday alone.