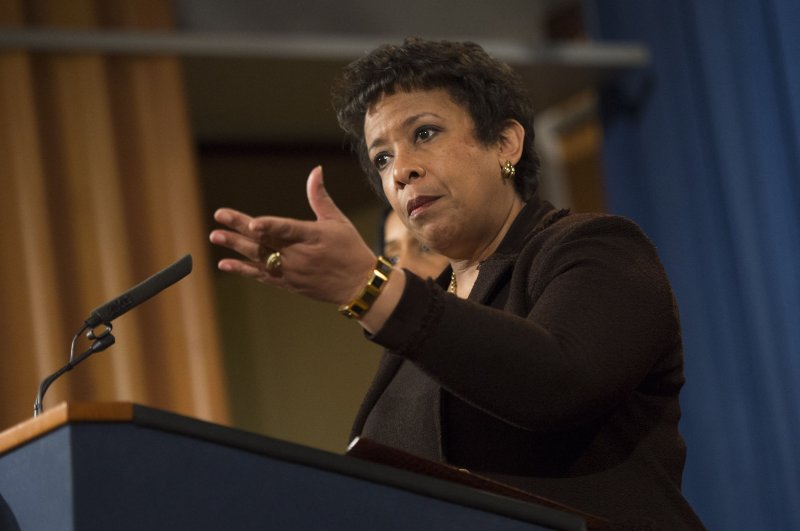 The Justice Department, a defendant in a suit challenging a proof of citizenship requirement on voter registration forms, came out in support of a ban on such requirements, leaving no one to defend the requirements at the federal level. The brief was filed by Attorney General Loretta Lynch's office. File Photo by Kevin Dietsch/UPI | License Photo

The department urged U.S. District Judge Richard Leon on Monday to issue a preliminary injunction to prevent Kansas, Alabama and Georgia from using the forms. The injunction was requested by the League of Women Voters, which is suing the U.S. Elections Assistance Commission over the forms.

The League brought the suit, alleging that the requirement to prove citizenship acts as a barrier to voter registration, particularly for poor, minority and elderly voters who may not have the required documentation.

The Justice Department's decision to support the ban is unusual because the department would otherwise be in the position of defending the EAC in the suit.

EAC executive director Brian Newby issued a directive on Jan. 29 allowing those three states to add the citizenship requirement to the registration forms.

In 2013, the Supreme Court struck down an Arizona law that similarly required proof of citizenship in the voter registration process. However, the late Justice Antonin Scalia wrote in the court's majority opinion that states could seek approval from the EAC for changes to voter registration forms. A year later, a federal appeals court ruled that the EAC was not required to make such changes to the federal registration form. The Supreme Court declined to review that ruling last year.

Since the federal forms have no requirement that voters provide documentation of their citizenship, those that have registered using the federal form effectively worked around the requirement. But Kansas Secretary of State Chris Kobach sought to close the loophole by saying that voters who used the federal form would not be able to vote in state or local elections. A judge struck down that requirement Friday. The Kansas City Star reported Kobach planned to appeal.

U.S. News // 4 hours ago
California's public universities to require COVID-19 vaccinations for fall term
April 22 (UPI) -- The California State University and University of California systems announced Thursday that they plan to require students, faculty and staff returning to campuses to be fully vaccinated against COVID-19.

U.S. News // 10 hours ago
Supreme Court rules unanimously against FTC's ability to get restitution
April 22 (UPI) -- The Supreme Court ruled Thursday that a provision does not give the Federal Trade Commission authority to seek monetary relief in a consumer redress case.