Justice Scalia's death could affect control of Senate in November

The United States Supreme Court is seen as snow falls Monday in Washington, D.C. With the recent death of Supreme Court Justice Anthony Scalia a political battle has been sparked on whether President Barack Obama should nominate a successor or wait until a new President is in office. Scalia died Saturday at the age of 79. Photo by Kevin Dietsch/UPI | License Photo

WASHINGTON, Feb. 16 (UPI) -- The death of Justice Antonin Scalia has left a vacancy in the Supreme Court that could intensify the battle for control of the Senate, in which a number of battleground state seats are up for grabs.

Scalia's death this weekend has escalated partisan tensions that could risk the Republicans Party's chances of retaining some Senate seats, which it needs to keep control of Congress.

Though not likely, the Democratic Party has a chance to retake the Senate in November's elections if it gains five seats -- or four if the presidency is retained.

Republican Sens. Kelly Ayotte, N.H., Ron Johnson, Wis., and Rob Portman, Ohio, have called for the Senate to dismiss any potential nominee to the Supreme Court before President Barack Obama leaves office. The three are running for re-election in swing states, meaning Democrats could use a potential confirmation battle as an opportunity to create a wedge issue to put GOP senators in contested states on the defensive.

There are Republican senators up for re-election in each of the swing states of Ohio, Florida, Pennsylvania, Wisconsin, New Hampshire and Illinois. Their success would depend upon winning a significant portion of relatively moderate or socially liberal voters who traditionally vote Democratic in presidential elections.

Some in the GOP argue that Obama should not name a successor and that it should be up to the next president to do so as elections loom, stating the American people should have a say on who gets nominated.

"With the election less than nine months away, I believe the best thing for the country is to trust the American people to weigh in on who should make a lifetime appointment that could reshape the Supreme Court for generations," Ohio Sen. Portman said in a statement Monday.

A makeshift memorial is set up on the steps U.S. Supreme Court following the death of Supreme Court Justice Antonin Scalia February 14, 2016 in Washington, DC. Scalia died at the age of 79. Photo by Kevin Dietsch/UPI
Advertisement

As Democratic and Republican politicians and interest groups prepare for the potential political windfall over the nomination of Scalia's replacement, the Obama administration reiterated that the president intends to "fulfill his constitutional responsibility" by nominating a new justice.

"This is not the first time the Republicans have come out with a lot of bluster only to have reality sink in," White House Deputy Press Secretary Eric Schultz said Monday. "We need a fully staffed Supreme Court."

The New York Times reports that since 1900, the Senate has voted on eight Supreme Court nominees during an election year. Six were confirmed, but several of those open seats were vacant since the previous year. The Senate has never taken more than 125 days to vote on a successor.

On average, the Senate has made a decision of confirmation, rejection or withdrawal within 25 days. When Scalia died Saturday, Obama still had 342 days left in his final term in office.

U.S. News // 17 minutes ago
SAT college admission exam will be fully digital by 2024
Jan. 25 (UPI) -- The College Board announced Tuesday that the SAT, PSAT and other standardized tests will shift to online exams.

U.S. News // 8 hours ago
Federal court orders Alabama congressional maps redrawn
Jan. 25 (UPI) -- A panel of federal court judges have thrown out Alabama's newly drawn congressional district maps, ordering for them to be redrawn to include an additional majority-Black district. 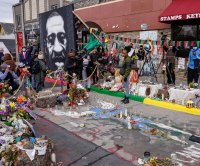 U.S. News // 10 hours ago
Tennessee man arrested for death of deputy found shot in burning home
Jan. 24 (UPI) -- Authorities in Tennessee said Monday that they have arrested a 22-year-old man for the death of a deputy who was found shot inside her burning home over the weekend.

U.S. News // 20 hours ago
3 firefighters killed, another critically injured in Baltimore roof collapse
Jan. 24 (UPI) -- Three Baltimore firefighters were killed and another was trapped Monday when a roof collapsed during a two-alarm fire at a vacant home, fire officials said.
Advertisement