Loc Ba Nguyen, an associate of one of the three inmates who escaped from a California jail on Jan. 22, was arrested Monday on charges of smuggling the tools the three men used to escape. If convicted, Nguyen could face more than five years in prison. Photo by Orange County Sheriff's Department

SANTA ANA, Calif., Feb. 1 (UPI) -- The three prison inmates who escaped from a Southern California jail two weeks ago, kidnapped a cab driver and forced him to drive them for several days while they debated killing him, police said Monday.

Details of the escapees eight-day run from a police manhunt were among the announcements of a pair of press conferences by the Orange County Sheriff's Department and the District Attorney's office on Monday.

Another accomplice was arrested and the prison ESL teacher who was accused of aiding the three was released, authorities said.

Sheriffs released an in-depth report of the manhunt, indicating one of the escapees, Bac Duong, was key to both the escape and capture.

Loc Ba Nguyen, an associate of Duong's was arrested on charges of smuggling the tools Hossein Nayeri, 37, Jonathan Tieu, 20 and Duong, 43 used to escape on Jan. 22 from the jail. If convicted, Nguyen could face more than five years in state prison.

Police think Nooshafarin Ravaghi, the 44-year-old ESL teacher charged with providing the men with maps, might have been helping Nayeri plan the escape since July, but Orange County District Attorney Tony Rackauckas said she would be released due to insufficient evidence.

"It is unfortunate she was labeled a conspirator," he said.

Her arraignment has been postponed for two weeks while the Sheriff's Department continue to investigate her.

Police said the escapees spent the few hours after their escape in the homes of various people they knew in Orange County, not far from the jail. They hailed a taxi around the time they were discovered missing and held the driver hostage, forcing him to drive the three for several days. At one point when the men were hiding out in a hotel in San Jose, Calif., Duong got into a physical fight with Nayeri over whether they should kill the driver.

Duong was for sparing the man's life. Later, when the other two were getting the windows tinted on the van they had stolen, Duong had the driver drive him back to Southern California, and he turned himself in on Friday. The other two were spotted and arrested in San Francisco the following day. 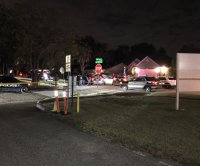 U.S. News // 7 minutes ago
Police rescue 30 from human smuggling in Houston
Dec. 4 (UPI) -- Police in Texas have rescued 30 people who were being held hostage as part of a smuggling operation in a Houston home, authorities said.

U.S. News // 38 minutes ago
UN chief says COVID-19 impact growing; EU proposes int'l pandemics treaty
Dec. 4 (UPI) -- United Nations Secretary-General Antonio Guterres warned the social and economic impact of the pandemic "is enormous and growing" and that a vaccine will not undo the decades of damage the coronavirus has caused.

U.S. News // 2 hours ago
Biden to call for 100 days of masking; asks Fauci to be chief medical advisor
Dec. 4 (UPI) -- President-elect Joe Biden said he will ask Americans on his first day in office to wear a mask for 100 days in order to stymie the spread of the coronavirus.

U.S. News // 4 hours ago
U.S. sanctions Iran-linked group over chemical weapons
Dec. 3 (UPI) -- The Trump administration on Thursday sanctioned an Iranian chemical engineering and research group along with its director over accusations of participating in Tehran's chemical weapons program.