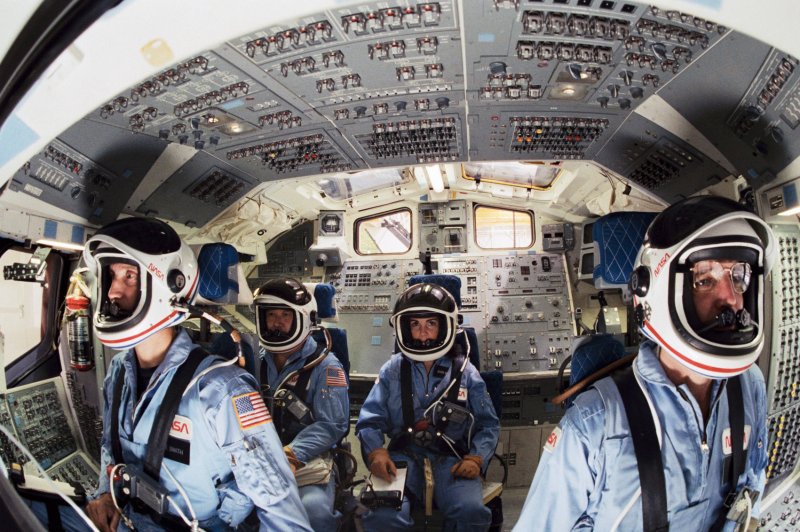 From left to right, astronauts Michael J. Smith, Ellison S. Onizuka, Judith A. Resnik, and Francis R. "Dick" Scobee in their launch and entry positions on the flight deck during training in the Shuttle Mission Simulator at Johnson Space Center in December 1985. On January 28, 1986, at 11:39 a.m. the Space Shuttle Challenger and its seven-member crew were lost when a ruptured O-ring in the right solid rocket booster caused an explosion 73 seconds after launch. File Photo by Bill Bowers/NASA | License Photo

The Space Shuttle Challenger lifts off from Launch Complex 39, Pad B, at Kennedy Space Center, at 11:38 a.m., on January 28, 1986. At 11:39 a.m., the shuttle and its seven-member crew were lost when a ruptured O-ring in the right solid rocket booster caused an explosion 73 seconds after launch. UPI File Photo | License Photo

On Jan. 28, 1986, Space Shuttle Challenger exploded 73 seconds into its flight from Cape Canaveral, Fla., killing all seven crew members, including teacher Christa McAuliffe, who would've been the first civilian in space.

The accident occurred at 11:39 a.m. after commander Francis ''Dick'' Scobee sent his last transmission: "Challenger. Go at throttle up.''

President Ronald Reagan postponed his State of the Union address slated for later that day, instead speaking to the nation on live television from the Oval Office less than six hours after the disaster.

"The future doesn't belong to the faint-hearted. It belongs to the brave,'' Reagan said. ''The Challenger crew was pulling us into the future, and we'll continue to follow.''

RELATED Challenger disaster at 30: Did the tragedy change NASA for the better?

That spirit of resilience and a deep sense of loss colored the world's reaction. Here is a sampling of what followed the disaster, from the UPI Archives.

An exciting field trip turned to despair as 17 third-graders from Kimball Elementary School in Concord, N.H., home of teacher-astronaut Christa McAuliffe, witnessed the explosion. McAuliffe's son, Scott, was in their class.

The Kimball pupils, bundled up against the frigid wind at the shuttleport, were in a festive mood. They unveiled a banner honoring their friend's mother. They laughed and yelled, spelling each letter of ''C-h-r-i-s-t-a'' in pep-rally style.

They cheered with each passing minute in the final countdown and squealed with delight as Challenger roared off of the launch pad.

But then came the terrible explosion and the tears and the questions.

''It's like getting a message your whole family was killed,'' said Pearson, one of the more than 100 teacher semi-finalists who competed against McAuliffe to be the first ordinary citizen to fly into space.

At Concord High School in New Hampshire, where McAuliffe taught social studies, students first cheered when the spacecraft took off, then quickly found themselves in tears and trembling when the Challenger suddenly burst into a ball of flames.

Main engine exhaust, solid rocket booster plume and an expanding ball of gas from the external tank is visible seconds after the launch of the Space Shuttle Challenger on January 28, 1986. UPI File Photo courtesy of NASA

There was dead silence followed quickly by tears, many of them angry. Teachers quickly ushered students back to classes. Reporters and photographers were ordered to leave the school.

''We were rejoicing in the liftoff ... celebrating with her,'' Principal Charles Foley said. ''Then it stopped. That's all. It just stopped.''

Military ships and aircraft ranged almost 175 miles across the Atlantic Ocean east of Florida's spaceport in a futile search for survivors of the shuttle and warned private vessels to stay away for fear of toxic debris.

Debris rained into the ocean for ''nearly an hour'' after Challenger burst into a fireball, slowing rescue teams from entering the area. Like all American space vehicles, shuttles are wired with explosive devices so they can be destroyed by ground command if a catastrophic failure sends them veering out of control over populated areas.

The loss of the shuttle Challenger staggered members of Congress and brought adjournments of Senate and House sessions. The seven who perished were lauded as pioneers who carried America's ''hopes and dreams'' into space.

Sen. Jake Garn, R-Utah, and Rep. Bill Nelson, D-Fla., who went into space on previous shuttle missions, said they would fly again, and Sen. John Glenn, D-Ohio, the first American to orbit earth, lamented, ''I guess I always knew there would be a day like this.''

''We all hoped it could be pushed back forever ... I feel a tremendous personal loss. They were carrying our hopes and dreams.''

Sorrow felt around the world

Television networks around the world interrupted programming to broadcast footage of the explosion, and world leaders expressed sorrow.

The 21-nation European Parliament held a moment of silence for the seven crew in Strasbourg, France. Calls and cables expressing sympathy poured into the White House.

At the United Nations, Secretary General Javier Perez de Cuellar expressed his "profound sadness" to Reagan: "Truly the entire world will grieve this tragic loss of life incurred in the advancement of the frontiers of human knowledge."

U.S. News // 1 hour ago
California dive boat captain charged over fire that killed 34
Dec. 1 (UPI) -- A federal grand jury on Tuesday indicted the captain of a dive boat that went up in flames last year off the coast of Southern California, killing 34 people on board.