"I am pleased to join former U.S. Senators Gordon Humphrey and John E. Sununu in supporting John Kasich for president," said Douglas in a statement put out by Kasich's campaign. "I had the honor of serving in Congress with John and can personally attest that he is a man of ideas, integrity, and enthusiasm.

"With so many choices, Republicans need to choose Governor Kasich as a candidate they can be proud of and unite behind to defeat Hillary Clinton or Bernie Sanders."

Kasich served in the U.S. House of Representatives for 18 years before leaving in 2001.

Douglas' endorsement is not only a sign that Kasich is embracing his tenure in the House, but that his support in New Hampshire is steadily growing. Recent polls show Kasich creeping up to second place in the Granite state, just weeks head of its primary.

U.S. News // 39 minutes ago
Washington, D.C., set for slate of events Wednesday for Biden-Harris inauguration
Jan. 19 (UPI) -- Amid a global pandemic and the heaviest security of any inauguration in modern American history, President-elect Joe Biden is set to be sworn in Wednesday as the 46th president of the United States. 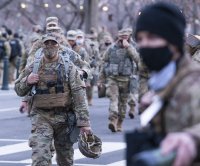