"The way Washington changes is when people vote," Obama said during the live event Thursday night.

The president appeared on the CNN special, titled Guns in America: Obama Town Hall, with host Anderson Cooper. During the live telecast from George Mason University in Fairfax, Va., Obama spoke of his new efforts to fight gun violence, reflected on tragedies of the past and took questions from concerned members in the audience.

One of the main goals of his orders is to close a loophole allowing gun sales by private parties at gun shows and over the Internet without conducting a background check.

Some Republicans in Congress have denounced Obama's actions as an unnecessary and unlawful breach of the Second Amendment.

"One of the most frustrating things that I hear is when [lawmakers] say ... 'why don't you just enforce the laws that are on the books?'" Obama said. "And those very same members of Congress then cut the Bureau of Alcohol, Tobacco, Firearms and Explosives' budgets to make it impossible to enforce the law."

Obama's proposal asks Congress to support resources in his fiscal 2017 budget for the addition of 200 new ATF agents and investigators to enforce existing gun laws.

Another concern voiced by critics is a fear the federal government is gradually seeking to reduce violence by taking guns away from the people -- a notion Obama called "imaginary fiction."

"The way it is described, is that we are trying to take away everybody's guns," he added. "Our position is consistently mischaracterized."

Mark Kelly, a retired NASA astronaut and gun control advocate who launched the political action committee Americans for Responsible Solutions with his wife, former Arizona Rep. Gabrielle Giffords -- who was seriously injured in a 2011 assassination attempt -- said he has spoken with lobbyists and U.S. senators who have stated definitively that tighter controls on guns will certainly lead to a registry, then to confiscation and finally to a "tyrannical" government.

"With 350 million guns in 65 million places, from Key West to Alaska ... if the federal government wanted to confiscate those objects, how would they do that?" Kelly inquired.

"This notion of a conspiracy out there -- it gets wrapped up in concerns about the federal government. There's a long history of that. It's in our DNA. The United States was born suspicious of some distant authority," Obama replied, dismissing the notion as fiction.

"This is not a proposal to solve every problem. It's a modest way of us getting started on improving the prospects of young men and young women ... the same way we try to improve every other aspect of our lives. That's all it is," Obama said, likening his action to the past introduction of seat belts and then air bags in the automobile industry -- steps that have led to fewer people dying in car accidents.

Thursday's town hall also touched on an editorial written by Obama and published in The New York Times on Thursday, titled, "Guns Are Our Shared Responsibility."

"The gun industry is almost entirely unaccountable. ... Congress has blocked our consumer products safety experts from being able to require that firearms have even the most basic safety measures," Obama wrote in the op-ed, which also called on American voters to use their authority in the voting booth.

"One of the things you say in [the editorial] was you are not going to campaign for, vote for any candidate, regardless of what party they are in, if they do not support common sense gun reform," Cooper asked, which was followed by applause from the audience.

"Yeah, I meant what I said," Obama replied. "The majority of people in this country are a lot more sensible than what you see in Washington. And the reason that Washington doesn't work well, in part, is because the loudest, shrillest voices, the least compromising, the most powerful or those with the most money have the most influence. And the way Washington changes is when people vote. And the way we break the deadlock on this issue is when ... the National Rifle Association doesn't have a stranglehold on Congress in this debate."

The NRA, the nation's most powerful gun lobby, declined an invitation to attend the town hall event, dismissing it as "a public relations spectacle orchestrated by the White House."

The Obama administration's outline of the president's executive actions says more than 20,000 American children under the age of 18 have been killed by gun violence in the last decade. It's one of the most sobering statistics on the issue for Obama, who shed tears announcing the new efforts Tuesday when recalling the Sandy Hook shooting rampage that killed 20 first-graders -- a moment replayed for Obama at the town hall Thursday night.

"It's the only time I've seen the Secret Service cry on duty," Obama recalled of visiting Newtown, Conn., two days after the Dec. 14, 2012, shootings.

On Thursday, Obama again addressed gun violence and American youth after getting a question from a teen from his hometown of Chicago.

"Growing up as a young black teen in Chicago, you're surrounded not only by gun violence but police brutality as well. Most of us aren't thinking about life on a long-term scale," Tre Bosley, a black teen who lost his brother and other relatives to gun violence, told Obama. "What is your advice to those youth growing up surrounded by poverty and gun violence?"

"When I see you, I think about my own youth, because I wasn't that different than you," Obama replied. "My main advice to you is continue to be an outstanding role model for the young ones coming up behind you."

Obama added that it's not just homicides that will be impacted by his actions this week.

"It's not just inner-city kids who are at risk in these situations," he said. "Out of the 30,000 deaths due to gun violence, about two-thirds of them are actually suicides. ... those, too, are tragedies. Those , too, are preventable."

The president also touched on the $500 million investment his proposal makes to achieve improved access to mental health treatment -- as well as the final element of his orders, that call for the development of new modern gun safeties.

"Part of my proposal is also developing better technologies so that we can do tracing of shells when a crime is committed in order to figure out who exactly are the perpetrators crime and where did they obtain the weapon," Obama stated.

Outside the hall, demonstrators from both sides of the issue made their presence known.

The College Republican Federation Of Virginia gathered demonstrators near the auditorium for a "peaceful protest to support our Constitutional rights." Some said they planned to bring firearms to underscore their Second Amendment rights. It is legal to carry firearms in Virginia, but the university does not allow them on campus.

Devon Flynn, chairman of the College Republicans at George Mason, said the seemingly one-sided nature of the event is leaving many wondering if Obama's legislation will be a true bipartisan effort.

"This is to tell President Obama to stop playing partisan politics and to actually work together," he said about the protest. "He says one thing and does the complete opposite."

U.S. News // 11 minutes ago
Schools in several states begin in-person, remote classes Monday
Aug. 10 (UPI) -- Schools in some parts of the United States were set to reopen their doors for in-person instruction on Monday, amid concerns for new COVID-19 outbreaks.

U.S. News // 1 hour ago
Poll: Most in U.S. don't think women have achieved equality
Aug. 10 (UPI) -- Women still have a ways to go to achieve equality with men in the workplace and in politics, a new Gallup survey said Monday.

U.S. News // 17 hours ago
21 people shot at large Washington, D.C. gathering
Aug. 9 (UPI) -- A 17-year-old was killed and an off-duty police officer is "fighting for her life" after 21 people were shot at a large gathering in Washington, D.C. on Sunday, police said. 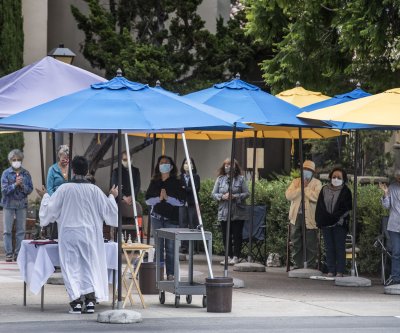