“A number of pieces of evidence ... have essentially pushed this off the cliff to where we are investigating this as an act of terrorism," FBI Los Angeles assistant director in charge David Bowdich said Friday.

Thousands attended a candlelight vigil honoring the 14 people killed and 21 injured in Wednesday's mass shooting at the San Manuel Stadium in San Bernardino, Calif., Thursday. The FBI on Friday said it is now handling the attack as an "act of terrorism." Photo by Jim Ruymen/UPI | License Photo

SAN BERNARDINO, Calif., Dec. 4 (UPI) -- Federal authorities leading the investigation into the mass shooting in Southern California this week are now handling the case as an "act of terrorism," a bureau official said Friday.

FBI Los Angeles assistant director in charge David Bowdich said at a news conference Friday that the case is being handled as terrorism, "as of today, based on the information and facts as we know them."

Bowdich said Thursday that it would be "premature" and "irresponsible" to label the attack as terror-related, suggesting that some new information has swayed the bureau's position on the matter.

Neither Bowdich or any other bureau official, though, detailed exactly what information made the difference, but the Los Angeles FBI official said Friday, "a number of pieces of evidence ... have essentially pushed this off the cliff to where we are investigating this as an act of terrorism."

One factor in the FBI's shift is likely the newly found allegiance to the Islamic State pledged via social media by accused shooter Tashfeen Malik, the 27-year-old woman who helped her husband, Syed Rizwan Farook, stage the attack that killed 14 at a San Bernardino County holiday party at the Inland Regional Center on Wednesday -- about 60 miles directly east of downtown Los Angeles.

Investigators said they found a Facebook post by Malik that pledged support, to Islamic State leader Abu Bakr al-Baghdadi. That posting has since been removed from the social site.

Bowdich also said investigators have been able to gain information from cellphones and computers that belonged to the couple. He said two of the phones were found in a trash can, indicating the pair attempted to "destroy their digital fingerprint."

The New York Times reported Thursday that Farook had deleted information from electronic devices at least a day before the attack.

Officials said earlier Friday that they had not yet ruled out the possibility that the attack was a religion-related workplace issue. It wasn't immediately clear how the FBI's new disclosure of terrorism impacts that theory.

Despite the bureau's new view of the attack as an act of terrorism, officials said they have found no evidence so far to indicate any known terror group or operative instructed the couple to carry out the attack.

"At this point we believe they were more self-radicalized and inspired by the group than actually told to do the shooting," an anonymous official told The New York Times.

Investigators said Farook and Malik have never been in trouble with the law and neither was on lists of potentially radicalized people. They did find indications that Farook, 28, had occasional contact with at least one person with terror connections.

Also Friday, San Bernardino County's coroner released the names of the 14 victims -- ranging in age from 26 to 60 -- who were killed at the party. Most were employees of the county's public health division.

The only victim who did not work for the county was Larry Daniel Kaufman, 42, who ran the coffee shop at Inland Regional Center and trained the developmentally disabled. Friends remembered him as a warm person who enjoyed the annual springtime Renaissance Faire in Southern California.

"He was so full of life it was ridiculous," longtime friend Stachia Chadwick said.

Also killed in the massacre were Bennetta Betbadal, 46, who fled Iran "to escape Islamic extremism and the persecution of Christians," and Nicholas Thalasinos, 52, a devoted Messianic Jew who was known to be outspoken about Islamic terrorism and had strong conservative views. Twenty one were wounded, some with injuries that include a shattered pelvis and multiple gunshot wounds.

Some of the wounded were able to contact family members during the shooting, including county environmental inspector Kevin Ortiz, who was shot twice in the leg and once in the shoulder.

"Kevin called me immediately after he got shot and said, 'I've been shot three times, Dad. I'm in pain. Don't worry. There's a policeman with me,'" his father said.

The others who died, identified Friday: 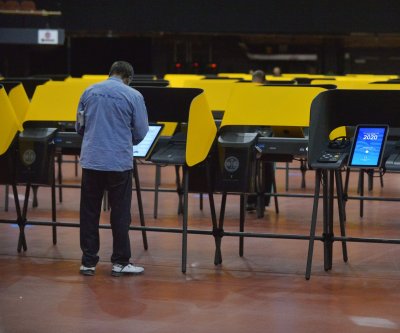