Despite $5 million refusal, Trump will appear at CNN debate

The billionaire says it's "too big of a risk" not to appear at the Dec. 15 debate. 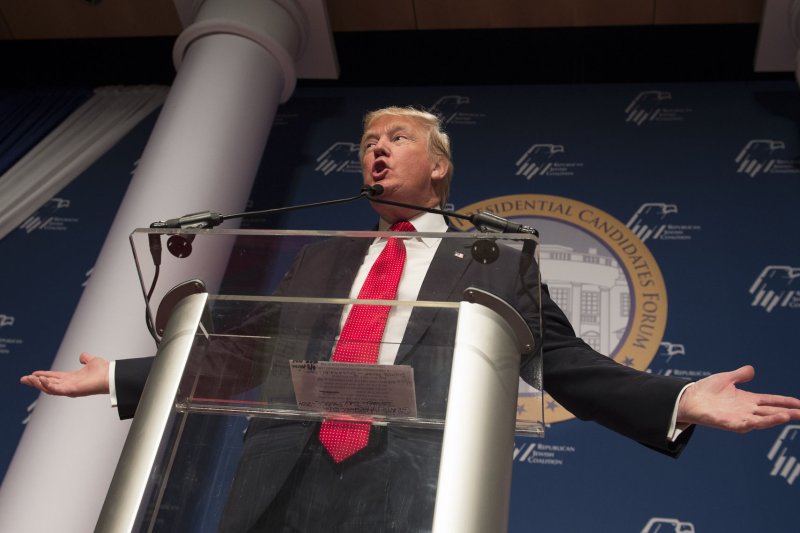 NEW YORK, Dec. 4 (UPI) -- Donald Trump has agreed to appear in the next televised debate, despite CNN's refusal to pay the mogul $5 million.

At a rally in Georgia on Monday, Trump told supporters: "How about we do this for CNN: I won't do the debate unless they pay me $5 million, all of which money goes to the Wounded Warriors or goes to vets?" Trump accused the network of not treating him fairly.

BuzzFeed editor Ben Smith asked CNN Worldwide President Jeff Zucker about the demand in an interview Thursday at the Paley Center for Media. "No," Zucker responded. "We do not pay candidates to appear."

Later Thursday, Trump told The Washington Post he would appear at the debate regardless.

"When you're leading in the polls, I think it's too big of a risk not to do the debate," he said. "I don't think I have the kind of leverage I'd like to have in a deal and I don't want to take the chance of hurting my campaign. So I'll do the debate."

The change of heart comes after Trump was booed at Thursday's presidential candidates' forum at the Republican Jewish Coalition. On the same day, Trump evaded questions from Bill O'Reilly on Fox News regarding an earlier claim Trump had made about killing terrorists' families. CNN reported Trump said in an interview Wednesday: "You have to take out their families, when you get these terrorists, you have to take out their families." When O'Reilley pressed Trump about the claim Thursday, Trump responded: "I don't want to be so bold."

The debate is scheduled to take place on Dec. 15 in Las Vegas.

Politico reported Trump pulled a similar move before September's GOP debate. He penned a letter to Zucker asking him to donate all profits from the televised event to veterans charities. CNN never issued an official response, and Trump ended up appearing at the debate.

U.S. News // 7 hours ago
Judge finalizes verdict for Depp vs. Heard defamation trial
June 25 (UPI) -- A Virginia judge has finalized the verdict in the defamation case between Johnny Depp and Amber Heard after the former couple failed to reach a settlement.

U.S. News // 7 hours ago
Laundrie admits to killing Petito in notebook pages, calls it 'merciful'
June 25 (UPI) -- Brian Laundrie wrote in his notebook that he thought his killing of fiancée Gabby Petito last year in Wyoming was "merciful," pages released by his family attorney show.

U.S. News // 10 hours ago
Southwest showers, storms to keep fire risk at bay
While the rain will help dent the ongoing drought and keep wildfire concerns at bay, too much rain at once can lead to the opposite problem, with flash flooding a possibility.

U.S. News // 11 hours ago
Protests rage on for second day against abortion ruling
June 25 (UPI) -- Activists took to the streets for a second day to protest after Friday's Supreme Court decision overturned nearly 50 years of federal abortion rights guaranteed under Roe vs. Wade.