The Oct. 13 Democratic candidate debate will be broadcast by CNN in virtual reality for owners of a Samsung Gear VR headset. Photo by Stefano Tinti/Shutterstock

Those who tune in to the debate and own a Samgung Gear VR headset will be able to feel as though they are in the audience. CNN partnered with VR streaming company NextVR to allow viewers to take control of the camera by looking at the candidate of their choice at any moment.

"CNN and NextVR will make history on October 13th by hosting the first-ever live stream of a news event in virtual reality," a press release said. The debate begins Tuesday at 8:30 p.m. EST and, from left to right, will feature candidates Jim Webb, Bernie Sanders, Hillary Clinton, Martin O'Malley and Lincoln Chafee.

The stream will mark the first major political event to be broadcast in virtual reality. Jason Farkas, executive producer at CNN Money and the lead of the virtual reality effort, acknowledged the small but growing virtual reality audience when speaking to Mashable. He said his company wants to be ahead of the game, saying "we're really pushing the envelope here."

Jaunt, a competitor to NextVR, believes that the technology is still too young and subject to technical issues like a low screen resolution (the VR headset requires the use of a phone to view VR content) and dropped frames. Scott Broock, the company's vice president of content, told Racked that "16 to 18 months is a fair prediction of when the technology will be capable."

CNN already filmed the last Republican debate in VR as a test run, and Samsung Gear users can now watch clips from that debate as well.

Samsung recently reduced the cost of their headset to $99, half off the original price.

U.S. News // 14 hours ago
Biden unveils strategy to end HIV/AIDS epidemic in U.S. by 2030
Dec. 1 (UPI) -- To commemorate World AIDS Day on Wednesday, President Joe Biden unveiled an updated national strategy to fight the disease -- which also aims to end the epidemic in the United States by the start of the next decade. 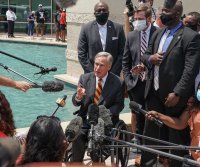 U.S. News // 9 minutes ago
Judge blocks Texas law to stop social media firm's from banning users
Dec. 1 (UPI) -- A federal judge on Wednesday blocked a Texas law that seeks to restrict how social media companies moderate their content and was championed by Republicans who say the platforms are biased against conservatives. 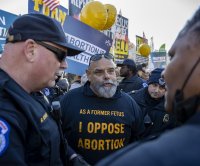