"I can twist myself into pretzels and fit into their silly little box, or I can be who I am," Republican presidential candidate Ben Carson said.

Republican presidential candidate Ben Carson on Wednesday attempted to clarify remarks he made a day earlier about the mass shooting in Oregon last week. Tuesday, he said he would have done more to survive if he was one of the victims, and said he would "probably not" go to Oregon and meet with victims' families this week if he was president. Wednesday, he defended his comments, saying, "people are never going to accept me because I don't believe in political correctness." File Photo by Max Whittaker/UPI/Pool | License Photo

In separate interviews with news media Tuesday and Wednesday, Carson described how he would have reacted if he'd been caught up in the shooting at Umpqua Community College on Thursday.

"I would not just stand there and let him shoot me. I would say, `Hey, guys, everybody attack him. He may shoot me but he can't get us all,'" the Republican neurosurgeon told Fox News' Fox & Friends Tuesday.

"I said what I would do. ... I would ask everyone to attack the gunman," he subsequently told ABC News. "That way we wouldn't all end up dead."

Carson, who is still receiving criticism for remarking last month that he would not approve of a Muslim U.S. president, has been stumping for president as he hopes to secure the GOP nomination.

The Republican's new remarks are now attracting yet more criticism from some who have said Carson appears to be blaming the victims -- nine of whom were killed and another nine who were wounded by the gunman.

President Barack Obama plans to travel to Roseburg, Ore., on Friday to meet with families of the victims, but several community members are criticizing the trip because they believe it's an attempt by the president to politicize the tragedy.

Carson is perhaps facing even harsher criticism for his reply to a question from Fox & Friends host Brian Kilmeade, who hypothetically asked, "Dr. Carson, would you go? If the people of the community say, 'don't go,' would you still go if you're president on Friday?"

"Probably not," Carson replied. "I would probably have so many things on my agenda that I would go to the next [shooting]."

"When comments like Republican candidate Ben Carson condemning President Obama's decision to visit and console the families in Roseburg in a private meeting, that somehow he would wait for the next one? It's stunning," Rep. Earl Blumenauer, D-Ore., said.

"I can't imagine a more callous, heartless remark than that," he added.

Carson again appeared on Fox News Wednesday and defended his remarks from a day earlier, saying that the fallout is merely a product of typical politicking that is being aided by the national news media.

"We are living in a culture now where you have a group of people who just sit there, they don't try to listen to what you're saying. They are just trying to find a defect so that they can cause more division," Carson said. "They are trying to divide our nation."

Carson then dismissed a question from anchor Martha MacCallum, who asked if he should exercise greater caution in communicating remarks to the public, saying, "I think people know exactly what I'm saying, and they know exactly what the media is trying to do.

"So I'm not going to change and become, you know, a vanilla envelope that they can accept. They are never going to accept me because I don't believe in political correctness -- so I can twist myself into pretzels and fit into their silly little box, or I can be who I am." 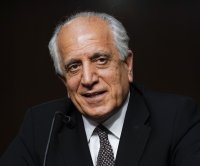 U.S. News // 10 hours ago
Zalmay Khalilzad resigns as U.S. envoy for Afghanistan
Oct. 18 (UPI) -- Ambassador Zalmay Khalilzad has resigned from his post as the United States lead diplomat to Afghanistan following the late summer exodus of the U.S. military from the war-torn country.