Obama on Oregon shooting: 'We can do something about it'

"Each time this happens I am going to bring this up. We can do something about it," Obama said. 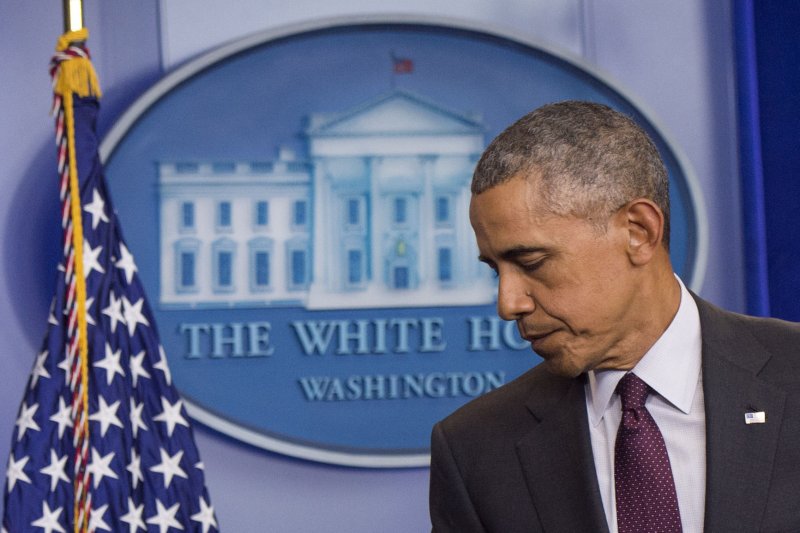 President Barack Obama speaks on the mass shooting at Oregon's Umpqua Community College at the White House in Washington, D.C., on Oct. 1, 2015. Earlier Thursday, a gunman killed at least 13 and wounded more than 20 others before being killed in a shoot out with police. Photo by Kevin Dietsch/UPI. | License Photo

WASHINGTON, Oct. 1 (UPI) -- Like he has done multiple times before, President Barack Obama on Thursday expressed sorrow and frustration about the deadly shooting rampage that struck a small community college in Oregon.

From the White House, Obama remarked on the massacre that reportedly left 10 people dead and many others injured Thursday morning.

"There has been another mass shooting in America," Obama said to begin his remarks. "That means there are more American families, moms, dads, children whose lives have been changed forever.

"In the coming days, we will learn about the victims -- young men and women who were studying and learning and working hard, their eyes set on the future, their dreams on what they could make of their lives.

Obama reiterated his belief that gun laws in the United States need to change in order for incidents like the one in Oregon to be prevented.

"Each time this happens I am going to bring this up. We can do something about it," he said. "But we are going to have to change our laws. And this isn't something I can do my myself."

Obama's demeanor was one that expressed sadness and a growing frustration over what he views as an ongoing problem that has yet to be met by a solution.

After previous mass shootings, like the one in Newtown, Mass., in December 2012 that left 20 children dead, Obama stressed the importance of gun control in the United States.

"I hope and pray I don't have to come out again during my tenure as president to offer condolences to the families in these circumstances," he said. "But based on my experience as president, I can't expect that. And that's terrible to say."

Obama said lawmakers need to meet situations like these with tougher firearms laws -- an issue long debated between Democrats and Republicans over the years.

Authorities said earlier that a man in his 20s opened fire in a science building on the campus of Umpqua Community College in Roseburg, Ore., which is located about 180 miles south of Portland, before he was confronted by police and killed.

"May God bless the memory of those who were killed today," Obama added. "May He give us the strength to come together and find the courage to change."

U.S. News // 10 hours ago
Google will delete data of those who visit abortion clinics
July 2 (UPI) -- Google announced Friday it will delete information including whether a person visited an abortion clinic as bans on terminating pregnancies grow in the wake of the Supreme Court's decision to overturn Roe v. Wade.

U.S. News // 12 hours ago
Man sought in shooting death of mom pushing baby stroller arrested in NYC
July 2 (UPI) -- The father of an infant whose mother was shot dead while pushing the baby's stroller on the Upper East Side of New York City earlier this week has been arrested.

U.S. News // 14 hours ago
Popular Minecraft gamer Technoblade dies of cancer at 23
July 2 (UPI) -- Technoblade, a massively popular gamer known for his Minecraft videos on YouTube, has died from cancer at the age of 23, his family announced Thursday.

U.S. News // 15 hours ago
Bodies of mother, 3 children recovered from Minnesota lake
July 2 (UPI) -- Minnesota police are investigating a possible triple-homicide after the bodies of a woman and her three children were recovered from a lake in Ramsay County.