Pope Francis addresses a joint meeting of Congress at the U.S. Capitol in Washington, DC on September 24, 2015. Francis is the first Pope to address Congress. The Pope is on his first trip to the United States, and also visits New York and Philadelphia. Photo by Pat Benic/UPI | License Photo

Pope Francis addresses a joint meeting of Congress at the U.S. Capitol in Washington, DC on September 24, 2015. Francis is the first Pope to address Congress. The Pope is on his first trip to the United States, and also visits New York and Philadelphia. Photo by Pat Benic/UPI | License Photo

Pope Francis arrives to address a Joint Meeting of Congress at the U.S. Capitol Building in Washington, D.C. on September 24, 2015. Photo by Kevin Dietsch/UPI | License Photo

Pope Francis addresses a joint meeting of Congress at the U.S. Capitol in Washington, DC on September 24, 2015. Francis is the first Pope to address Congress. In the background are Vice President and Senate President Joe Biden and Speaker of the House John Boehner (R). The Pope is on his first trip to the United States, and also visits New York and Philadelphia. Photo by Pat Benic/UPI | License Photo

WASHINGTON, September 24 (UPI) -- At a historical joint session of Congress, Pope Francis reflected his hope for the U.S. to model itself after four historical Americans: Abraham Lincoln, Martin Luther King, Dorothy Day, the founder of the Catholic Worker Movement and Thomas Merton, a peace-promoting Trappist monk.

"They shaped fundamental values which will endure forever in the spirit of the American people. A people with this spirit can live through man crises, tensions and conflicts, while always finding the resources to move forward, and to do so with dignity," said Francis.

The first ever Latin American pope emphasized the importance of dialogue on issues related to the current refugee crisis, family unity, religious fundamentalism, distribution of wealth, abolition of the death penalty, climate change and immigration.

"We, the people of this continent, are not fearful of foreigners, because most of us were once foreigners. I say this to you as the son of immigrants, knowing that so many of you are also descended from immigrants," he said before receiving a standing ovation.

The room was at full capacity with members of Congress, Supreme Court justices, religious leaders and members of the public attending. The crowd cheered repeatedly throughout his speech, but his comments on the arms trade didn't get much praise from Republicans.

"Why are deadly weapons being sold to those who plan to inflict untold suffering on individuals and society? Sadly, the answer, as we all know, is simply for money: money that is drenched in blood, often innocent blood. In the face of this shameful and culpable silence, it is our duty to confront the problem and to stop the arms trade," the pope said.

Many of his views aligned with the Democratic Party -- he indirectly referenced support for recent policy changes like the re-establishment of diplomatic relations with Cuba and the nuclear agreement with Iran .

"When countries which have been at odds resume the path of dialogue -- a dialogue which may have been interrupted for the most legitimate of reasons- new opportunities open up for all," he said.

Francis reiterated his view of climate change -- also at odds with many Republicans -- as related in his encyclical, Laudato Si'.

"The speech should give the Republican leadership candidates a headache," said James Weiss, Boston College professor of church history with a specialty in the papacy. "Boehner must wonder what he was thinking to invite Francis."

The pope rounded out his speech stressing the courageous feats of the four model Americans that he wove in and out of his address and ended with "God bless America."

This was one of four speeches his holiness conducted in English, the others being in Spanish. After his address to Congress he met with charitable organizations at St. Patrick's Catholic Church.

Francis left the nation's capital at 4 p.m Thursday and continued his U.S. tour to New York and Philadelphia. He returns home to Rome Sunday night.

U.S. News // 43 minutes ago
Gallup: Almost 70% in U.S. say COVID-19/viruses are most urgent health issues
Dec. 4 (UPI) -- An overwhelming majority of Americans say COVID-19 and viruses in general are the chief health concerns right now in the United States, according to a Gallup survey Friday.

U.S. News // 6 hours ago
Biden to call for 100 days of masking, taps Dr. Fauci as chief medical adviser
Dec. 4 (UPI) -- President-elect Joe Biden said he will ask Americans on his first day in office to wear a mask for 100 days in order to stymie the spread of the coronavirus.

U.S. News // 8 hours ago
U.S. sanctions Iran-linked group over chemical weapons
Dec. 3 (UPI) -- The Trump administration on Thursday sanctioned an Iranian chemical engineering and research group along with its director over accusations of participating in Tehran's chemical weapons program. 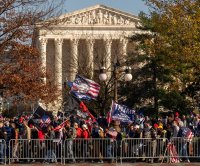