A judge again denied the prosecution's request to set Carmine "The Bull" Agnello's bond at $1 million.

Carmine "The Bull" Agnello, the ex-husband of Gotti's daughter and a former Gambino crime family member, faces charges of operating the scam by supposedly accepting stolen vehicles at his Cleveland scrap yard -- where he fraudulently inflated the cars' weight and sold the parts.

All told, Agnello is accused of defrauding the scrap facility out of about $4.2 million, the Cleveland Plain Dealer reported.

Friday, he pleaded not guilty to conspiracy and racketeering. Prosecutors said additional charges are coming.

Agnello, 54, was first arrested in July and prosecutors have since asked the judge twice to raise his bond from $100,000 to $1 million. A judge denied both requests, leading the state of Ohio to further worry he may be a major obstruction and flight risk.

The defense, though, disputed such a dramatic increase in bond on the grounds that Agnello has not been indicted on violent charges. Defense attorney Roger Synenberg said the state's credibility "went in the toilet" with Friday's repeated bond request.

"They don't ask for $1 million bond when they have people who are charged with murder but they thought it would be appropriate to bring old news ... 25 years old ... to bias this court to change his previously set personal bond," Synenberg told ABC 5 in Cleveland.

"It would be a travesty if the New York mafia was able to set up operations in Cleveland and we intend to stamp this fire out before the whole house burns down," prosecutor Matthew Meyer responded. "If you so much as spit on the sidewalk and you're connected to organized crime you'll get indicted."

Synenberg and Meyer even continued the verbal joust after the court proceeding concluded. The Plain Dealer reported the defense counselor said, "this is serious business" and "think about it" to Meyer. The prosecutor responded, the newspaper said, with a half-hearted "have a good weekend."

It's unclear what additional charges Agnello might face, but authorities have said they believe he is also involved in doping race horses.

Agnello was imprisoned for seven years a decade ago on similar charges in New York City and tax evasion. Gotti, who died of throat cancer in 2002, was convicted and sentenced to life in prison in 1992 for numerous organized crime-related offenses.

U.S. News // 1 hour ago
Police: Portland hit-and-run rampage not terrorism
Jan. 26 (UPI) -- Police in Portland, Ore., said Tuesday that detectives have found no evidence a series of hit-and-runs a day prior that resulted in the death of a pedestrian was motivated by terrorism. 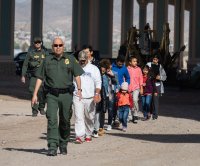 U.S. News // 7 hours ago
Biden raises 'matters of concern' in first phone conversation with Putin
Jan. 26 (UPI) -- President Joe Biden said the United States would "act firmly in defense of its national interests" in response to harmful actions by Russia in his first phone call with Russian President Vladimir Putin.