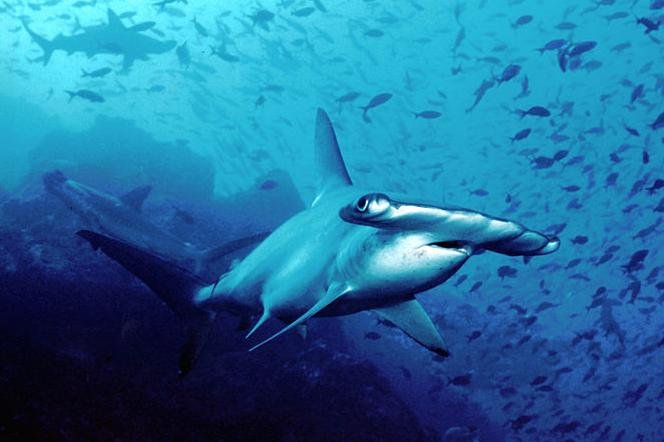 A hammerhead shark similar to this one was spotted off a La Jolla, Calif. beach. Photo by Barry Peters/CC

SAN DIEGO, Aug. 30 (UPI) -- Swimmers and kayakers are being warned to keep a close eye on the water after an eight- to 10-foot hammerhead shark was spotted lurking near a stretch of beach in La Jolla.

The shark reportedly circled and followed a group in the water, prompting lifeguards to close the beach Saturday between La Jolla Cove and Scripps Pier. The beach was reopened about 7 a.m. Sunday but remains under "shark advisory," local officials said. No one was injured.

San Diego Fire-Rescue spokesman Lee Swanson said the shark was showing "aggressive behavior" toward a group of four swimmers, who scrambled aboard nearby kayaks. The shark then followed the kayakers toward the shore, to the surfline.

Jimmy Van Evera, 36, shot cellphone video of the shark that circle him and his dad as they were in their kayaks.

"We each caught a yellowfin, and we always bleed them out to keep them fresher," Van Evera said. "We were paddling back in, and we saw this hammerhead pop up near our kayaks."

U.S. News // 1 hour ago
Former Trump Organization CFO reportedly reaching plea deal
Aug. 17 (UPI) -- The Trump Organization's former Chief Financial Officer is hashing out the details of an agreement that would see him plead guilty to tax evasion charges, the New York Times was the first to report on Wednesday.

U.S. News // 3 hours ago
Court told R. Kelly paid witnesses to keep quiet about alleged underage tapes
Aug. 17 (UPI) -- Prosecutors contend R. Kelly recorded sexual encounters with underaged girls and then paid people who were aware of them not to talk, a federal courtroom was told on the opening day of his criminal trial Wednesday.

U.S. News // 4 hours ago
U.S. traffic deaths surge as driving increases
Aug. 17 (UPI) -- The National Highway Traffic Safety Administration announced 9,560 people died in vehicle crashes in the first quarter of this year, a 7% increase compared to 2021 and the most first-quarter deaths since 2002.

U.S. News // 5 hours ago
Bills restricting classroom topics have nearly tripled in 2022
Aug. 17 (UPI) -- State legislatures are increasingly proposing bills to restrict how topics including race, gender identity and sexual orientation are taught in school, according to a report published Wednesday by PEN America.

U.S. News // 6 hours ago
CDC announces overhaul after COVID-19 response failed 'expectations'
Aug. 17 (UPI) -- The U.S. Centers for Disease Control and Prevention announced plans Wednesday to overhaul the agency after reviews found it fell short in its handling of the COVID-19 pandemic and responded too slowly to monkeypox.
Advertisement

Zelensky warns Ukrainians to stay away from Russian installations in Crimea