Trump, Clinton show up at Iowa State Fair; Free rides in the 'Trumpcopter' 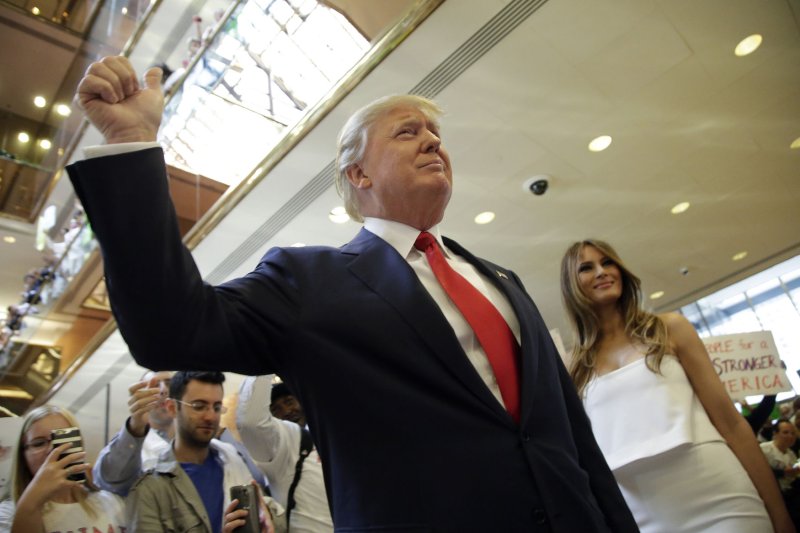 Republican presidential candidate Donald Trump traveled to Iowa on Saturday, where he showed up to the state fair in his private helicopter and gave free rides to children in attendance. File Photo: John Angelillo/UPI | License Photo

Perhaps the two major frontrunners for the White House -- Hillary Clinton and Donald Trump -- made an appearance at the annual event Saturday, about five months before votes are cast in the state's influential caucuses.

More than a million people visit Iowa's fair each summer, organizers say, and that was apparently too large of an audience for the presidential hopefuls to resist.

Clinton, accompanied by her large entourage of staffers and security, showed up just before noon local time with former Iowa Sen. Tom Harkin.

The former Secretary of State took photos with numerous fair-goers, engaged in several exhibits at the fairgrounds and spoke to Iowa voters.

"I'm deeply honored to have Tom's support," she said after shaking hands of people who waited for more than an hour in the hot Iowa sun to meet the former first lady.

Dozens of people took the opportunity to take photos of Clinton for some social media exposure before she departed the fairgrounds.

Clinton's GOP counterpart, Trump made a grand entrance -- the likes of which the Iowa State Fair has probably never seen. The New York real estate magnate swooped in aboard his private helicopter and offered free rides in the chopper for kids at the fair.

"Does anyone want to take a ride?" he gleefully asked children in the parking lot upon his arrival, dressed in a suit and a bright red cap that read, "Make America Great Again" -- Trump's oft-repeated slogan.

According to the Washington Post, there was only enough fuel to fly for an hour so not everyone got a chopper ride.

Trump continues to take the Republican race by storm. In recent weeks, he has emerged as a frontrunner for the GOP nomination with his typically outspoken rhetoric and no nonsense approach to politics.

Saturday, Trump didn't shy away from opportunities to distinguish himself from the other candidates -- or criticize them.

"I know how the system works better than anybody," he said, talking about lobbyists' grip on Washington. "And when they give $5 million or $2 million or $1 million to Jeb [Bush], they have him just like a puppet. He will do whatever they want."

"Since the Bush years, I haven't been interested in putting anyone in power," Iowa resident Joe McNeley, a former Democrat, said of his support for the billionaire business leader. "Mr. Trump -- he's not in the political realm. He speaks his mind and he's not afraid."

Without question, The Donald's trump card in the race is his unlimited supply of money -- which he is not squeamish about flaunting.

When asked by a reporter how much he might spend on his campaign, Trump said, "That's irrelevant... I make $400 million a year so what difference does it make?"

Would he spend $1 billion?

"Yes. If I had to," Washington Post reporter Jenna Johnson tweeted.

The critical Iowa Caucuses, which help shape which candidate the parties will nominate, will be held next January. Voters in all of the state's 99 counties will submit their choice for the Democratic and Republican nominee -- whom Iowa's delegates will formally nominate at each convention next summer.

U.S. News // 5 hours ago
South Carolina high court delays 2 executions until firing squad available
June 17 (UPI) -- South Carolina's Supreme Court has ordered delays for the executions of two condemned inmates who were scheduled to die this month because the electric chair is still the only method available to them.