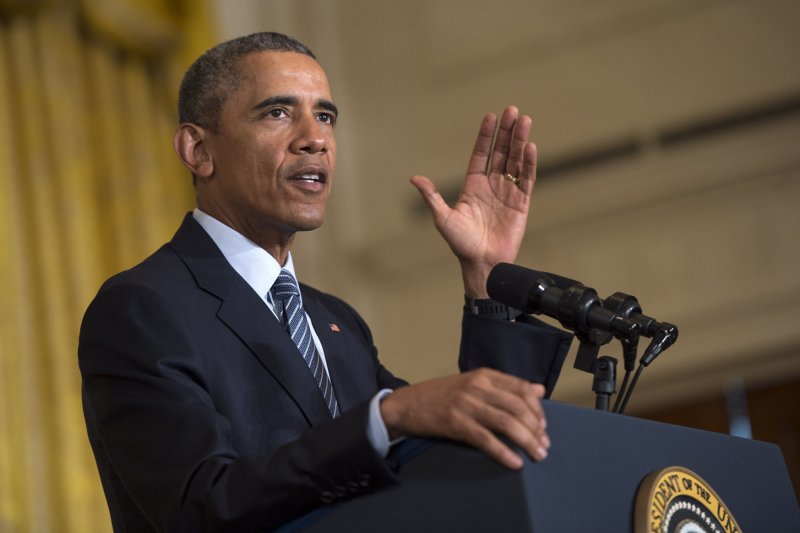 President Barack Obama on Monday unveils his new Clean Power Plan aimed at cutting greenhouse gas emissions from power plants by nearly a third within 15 years, in the East Room at the White House in Washington, D.C. Photo by Kevin Dietsch/UPI | License Photo

WASHINGTON, Aug. 3 (UPI) -- President Barack Obama on Monday called for a 32-percent reduction in carbon emissions as part of his Clean Power Plan, which he says will be "the single most important step that America has ever made in the fight against global climate change."

Speaking from the White House, Obama took yet another step toward further establishing his legacy of climate change initiatives.

"Today after working with states and cities and power companies, the EPA is setting the first ever nationwide standards to end the limitless dumping of carbon pollution from power plants," he said. "Washington is starting to catch up with the vision of the rest of the country. "

Under the Clean Power Plan, Obama, along with the Environmental Protection Agency, set standards to reduce carbon dioxide emissions by 32 percent from 2005 levels by 2030. The original proposal for the plan -- which has been two years in the making -- included a 23 percent reduction.

Each state will be given certain carbon emission reduction standards based on their individual energy consumption. They will also be given incentives for taking early steps to meet those standards.

States will be allowed to come up with their own plans to determine how to meet the standards based on what works best for them.

Obama said the plan is the first-ever attempt to set national standards to limit carbon pollution from power plants.

"Power plants are the single biggest source of harmful carbon pollution that contributes to climate change," Obama said in the video. "Until now, there have been no federal limits to the amount of carbon pollution plants dump in the air."

The plan also seeks to boost the clean energy sector and reduce the number of deaths from power plant emissions by nearly 90 percent by 2030. The White House says the plan will avoid up to 3,600 premature deaths, 90,000 asthma attacks in children, and 300,000 missed work and school days.

The average American family could save a $85 on their annual energy bill. Gina McCarthy, administrator of the EPA, told reporters the Clean Power Plan would cost $8.4 billion to implement and result in $34 billion to $54 billion in benefits.

But some critics say the initiative could result in soaring energy costs. Luke Popovich, vice president of communications for the National Mining Association (NMA), told CNN "this plan is all pain and no gain.

"That's why state leaders across the country are coming to the same conclusion -- that we should not sacrifice our power system to an unworkable plan built on a faulty interpretation of the law."

The NMA has filed a request with the EPA to stay the Clean Power Plan while courts determine if it is lawful.

U.S. News // 56 minutes ago
Grand Canal painting fetches $56.6M, a record for Monet Venice work
May 17 (UPI) -- A Claude Monet painting of the Grand Canal in Italy sold at auction Tuesday for $56.6 million, the highest one of his Venice paintings has fetched, Sotheby's in New York announced.