NEW YORK, July 22 (UPI) -- A New York City panel appointed by Gov. Andrew Cuomo on Wednesday issued a formal recommendation that the state's fast-food employees receive a minimum wage of $15 per hour -- a recommendation expected to be approved by labor officials.

The panel's decision is the result of a massive labor movement that began three years ago, which has already improved pay for minimum wage workers across the United States.

The proposal must now receive approval by state labor officials, which is expected, and should be implemented over the next few years. New York City is expected to see the wage hike sooner than most cities in the state due to its increased cost of living, the New York Times reported.

An hourly minimum of $15 would nearly double New York state's current minimum wage of $8.75 -- an amount that many employees say does not allow them to cover basic living costs.

The panel's recommendation only affects pay in the fast-food industry, but officials believe the raise will catch on in other industries shortly.

"When New York acts, the rest of the states follow," Cuomo said, noting the state's recent legalization of same-sex marriage. "We have always been different, always been first, always been the most progressive."

Large cities across the United States have boosted their minimum wages in recent weeks -- including Los Angeles, San Francisco and Seattle. In Washington, D.C., a proposal to raise the minimum wage to $15 per hour is expected to be included on the 2016 ballot.

Since 2009, the federal government has mandated a minimum wage of at least $7.25, but states are free to raise their minimums to higher levels if they wish.

U.S. News // 53 minutes ago
Scott Peterson to get new sentence for killing wife Laci, unborn son
Dec. 8 (UPI) -- Scott Peterson, the California man who killed his wife Laci two decades ago and received significant media attention, will appear in court Wednesday to be resentenced for the killing. 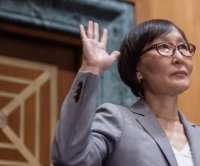 U.S. News // 2 hours ago
Roku reaches deal to keep YouTube after 8 months of dispute
Dec. 8 (UPI) -- Facing the prospect of losing YouTube from its popular streaming service, Roku announced Wednesday that the two companies have reached a deal to keep it there for at least a few years.