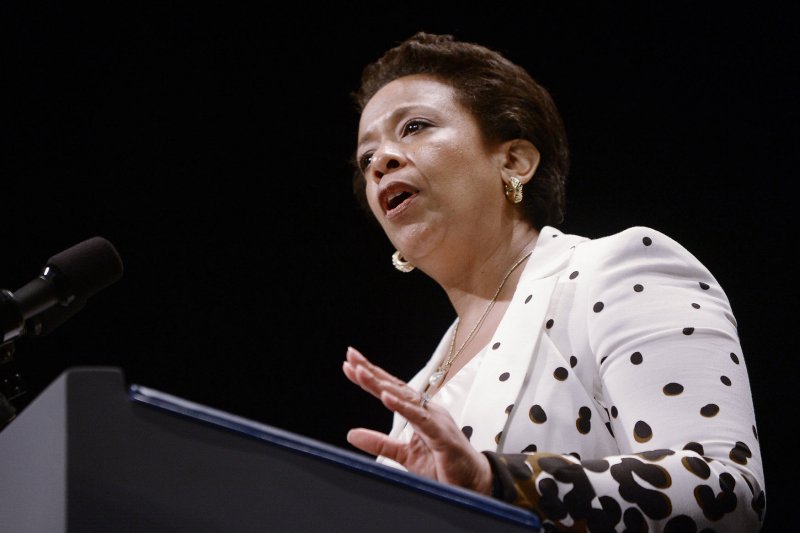 Attorney General Loretta Lynch speaks after being sworn in during a formal investiture ceremony at the Warner Theatre on June 17. Wednesday night, Lynch, speaking at the NAACP's national convention, called for reforms to America's criminal justice system and for the nation to move forward for justice and civil rights. File Photo by Olivier Douliery/UPI | License Photo

PHILADELPHIA, July 16 (UPI) -- U.S. Attorney General Loretta Lynch called for reforms to America's criminal justice system and for the nation to push beyond the "cycle of criminality and incarceration" as a way to move forward for justice and civil rights.

Echoing similar sentiments by President Barack Obama and former President Bill Clinton, Lynch told the NAACP national convention Wednesday night "law enforcement can protect communities without breaking them" and that "communities can and must be partners in the effort to ensure public safety." She said there must be a new approach to criminal justice, one that doesn't disproportionately fill the nation's prisons with black and Hispanic inmates.

"We need children – particularly children of color – to turn towards the law enforcement officers in their neighborhoods; to view them as partners, helpers and members of the community; and to aspire to become guardians themselves," she said. "Ultimately, we need children to see possibilities for themselves beyond the cycle of criminality and incarceration that has too often become a tragic and familiar fact of life."

In her 25-minute address to close the convention, Lynch touched upon comments made by both Obama and Clinton the previous night. Clinton said he signed a law "that made the problem worse," referring to the 1994 crime bill that increased sentencing standards, leading to the mass incarcerations seen now. Obama added the moral and financial obligations from these incarcerations has strained the United States.

Lynch's statements avoided speaking about specific policy or events, including the death of unarmed black men at the hands of law enforcement. Instead, she outlined the accomplishments by the Obama administration. She praised the Supreme Court's decision last month to continue upholding the Fair Housing Act of 1968 as a way to continue to fight housing discrimination.

"Our attorneys and investigators, led in part by our outstanding Civil Rights Division, are present on the ground and fighting on all fronts to bring equal rights and equal justice to all Americans – no matter who they are, where they come from or what they look like," she said.

Lynch also talked about the need for the country to focus on prison alternatives, restoring voting rights to felons and a deep examination of the perils of solitary confinement.

"America is a land of second chances – but it must also be a land where we give opportunities to young people who haven't gotten a chance at all," she said. "That's why we need to make clear to the youth of this nation – not only with our words, but with our actions – that we value them, that we care about them, that we will stand with them and that America is their country too."

U.S. News // 1 hour ago
Poll: 77% of Americans confident government can handle coronavirus outbreak
Feb. 20 (UPI) -- A Gallup poll found that 77 percent of Americans were confident in the federal government's ability to handle an outbreak of the coronavirus, which is known officially as COVID-19.