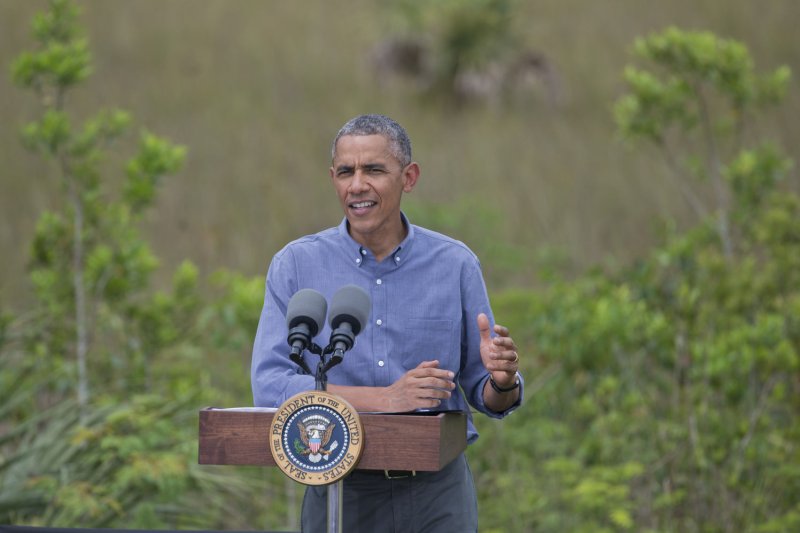 HOMESTEAD, Fla., April 22 (UPI) -- Speaking from the Florida Everglades on Earth Day, U.S. President Barack Obama called on Congress to support funding to address climate change and introduced a plan to allow all fourth-graders free admission to all public lands.

Using the Florida setting as an example of an ecosystem threatened by global warming, Obama said protecting the national parks in particular makes sense for the U.S. economy.

"Every dollar invested in national park services generates $10 for the economy," he said, calling it a "good investment."

"Protecting our national parks is a smart thing to do," Obama said.

"I'm calling on Congress to fully fund the land and water conservation fund, which supports this work across the country," he said.

The fund is set to expire in September, and Reps. Raul M. Grijalva, D-Ariz., and Mike Fitzpatrick, R-Pa., last week introduced a bill to permanently reauthorize the act.

"For 50 years the Land and Water Conservation Fund has remained the nation's premier conservation, recreation and preservation support program," Rep. Fitzpatrick said, announcing the legislation April 15. "While authorized by Congress, the program is not funded by taxpayer dollars, making it a responsible, practical method to protect our nation's natural landscape and beauty."

Obama on Wednesday announced the Every Kid in a Park program starting in the fall. The program would give each fourth-grader a pass allowing them and their families free access to all public lands.

"Because no matter who you are, no matter where you live, our parks, our monuments, our lands, our waters ... these places are your birthright as Americans," Obama said.

He also announced the designation of the country's newest national historical landmark, the Marjory Stoneham Douglas House, home to an environmentalist who wrote The Everglades: River of Grass.

"You do not have time to deny climate change," Obama concluded, perhaps referring to reports that Florida Gov. Rick Scott banned the use of the term "climate change" in official communications.

"No where is it going to have a bigger impact than here in South Florida," Obama said. "If we take action now we can do something about it. This is not some impossible problem that we cannot solve. We can solve it if we have some political will."