Sen. Rand Paul (R-KY) delivers remarks as he announces his presidential candidacy on April 7, 2015 in Louisville, Kentucky. Paul officially announced his 2016 presidential campaign for the President of the United States during the event. Photo by Jamie Rhodes/UPI | License Photo

WASHINGTON, April 20 (UPI) -- Though Sen. Rand Paul has already emerged as an outspoken voice in the 2016 presidential race, the success of his campaign may hinge on his ability to appeal to different stripes of Republican and libertarian. So far, the Libertarian Party seems split over him.

The Libertarian Party, which calls itself the nation's third largest political party with 250,000 registered voters, supports individual liberty and limited government. Paul's father, former Texas Rep. Ron Paul, who endorses a strict brand of libertarianism except on abortion, has run for office on both a Republican and Libertarian ticket.

In some cases Rand Paul, a first-term senator from Kentucky, compromises by knitting together disparate views and logic from both camps.

Sarwark specifically highlighted Paul's views on foreign intervention. Earlier in his career Paul swung more toward the official libertarian view, that the U.S. should sustain only a sufficient military force to defend against aggression, while avoiding entanglements abroad. More recently, Sarwark says, Paul has come out in support of using force in the Middle East.

On gay rights, Paul has supported pushing the decision on same-sex marriage back to the states, rather than arguing the libertarian stance that individuals should have freedom to decide who to marry. Both his approaches to foreign intervention and gay rights represent an attempt to court both conservative Republicans and libertarians, Sarwark argued.

"He's done some good work on trying to rein back drone warfare, so he does have these flashes of libertarian positions, and I wish him all the best in getting the Republican nomination because he is the best they have to do, but the best is not good enough for a libertarian," Sarwark said.

But others from the libertarian camp see Paul's views differently.

"The perfectionist sees it as more educational than political. This idea that you need to stand for liberty across the board, do not compromise and politics maybe will follow," he added.

Painted this way, the terms have a nice grammatical flow: Paul can describe himself as a "libertarian Republican" rather than define himself solely as a libertarian.

And some of his views make sense under such a label. For instance, Paul is softer on marijuana regulation, but not entirely for the libertarian reason of prohibiting government intervention in personal matters. Rather, Paul has argued that harsh punishment for drug infractions has ruined people's lives.

"He's arguing a kind of libertarian goal but not in libertarian terms," Doherty said. "And that upsets some people."

Libertarian realists, Doherty said, accept that having a candidate with any libertarian values at all represents a victory. Paul will win the libertarian vote because party members are excited enough to see a serious player championing some of their values.

A libertarian from the Democratic Party and former Democratic National Committee press secretary, Terry Michael, thinks Paul has to appeal to a Republican party that has become striated.

"Paul is less a libertarian than he is a politician," he said. "When he was elected to public office, he had to appeal to four different segments of the Republican party:" Main Street, Wall Street, social conservative religious right Republicans and hawkish neo-conservatives.

He also believes Paul may capture some of the millennial vote, many of whom identify as libertarian, or are what he calls "functionally libertarian."

"I think he's doing it fairly simply," Michael said, adding that young voters will probably like Paul's economic views and his less oppositional stance on gay civil marriage. "I think if he [Paul] starts sounding more hawkish where people are just totally tired of 60 to 70 years of wars, that could be a problem."

Michael also said both Paul and fellow candidate, Sen. Marco Rubio, R-Fla., are in the same place Obama was at the time of his candidacy, with little time in higher public office.

"It's kind of unusual," he said, "but Obama broke that barrier that people don't care about experience or age."

U.S. News // 1 hour ago
200,000 sign up for ACA during first 2 weeks of special enrollment
March 3 (UPI) -- President Joe Biden said Wednesday that more than 200,000 have signed up for coverage under the Affordable Care Act in the first two weeks since his administration reopened enrollment.

U.S. News // 4 hours ago
Federal agents investigating major California highway crash that killed 13
March 3 (UPI) -- California authorities say 13 people were killed in a major wreck near San Diego on Tuesday and more than a dozen are in the hospital with serious injuries.

U.S. News // 6 hours ago
ADP-Moody's: U.S. added 117,000 private-sector jobs in February
March 3 (UPI) -- Businesses in the United States added almost 120,000 jobs during the month of February, well short of what many economists were expecting, according to a private-sector assessment Wednesday.

U.S. News // 7 hours ago
Texas small business owners worry about lifting COVID-19 restrictions
March 3 (UPI) -- Texas Gov. Greg Abbott's order will leave it to business owners to decide whether to require customers to wear masks inside their establishments. "It's putting us in the firing line," one owner said.

U.S. News // 17 hours ago
Democrats propose creation of monument for Ruth Bader Ginsburg on Capitol Hill
March 2 (UPI) -- Democrats in the House and Senate on Tuesday introduced a bill proposing the construction of a monument honoring the late Supreme Court Justice Ruth Bader Ginsburg at the Capitol. 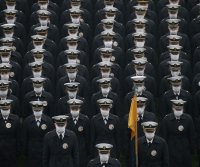 U.S. News // 18 hours ago
Pentagon report warns extremists use military to boost legitimacy, combat skill
March 2 (UPI) -- A Department of Defense report released on Tuesday warned that members of White supremacist and other extremist groups covet military members to increase the legitimacy of their cause and ability to carry out attacks.