Federal law classifies bullets as illegal if they are capable of piercing body armor and can be fired from a handgun.

Steven King, owner of a gun supply store, shows an AR-15, 556-caliber rifle. Armor-piercing 5.56mm ammo might be outlawed by the ATF due to its capability of being fired from a handgun. File Photo by Bill Greenblatt/UPI | License Photo

WASHINGTON, Feb. 26 (UPI) -- The Bureau of Alcohol, Tobacco and Firearms (ATF) is floating the idea of prohibiting public sale of a certain type of ammunition capable of penetrating the bulletproof vests worn by police officers.

Last week, the ATF outlined the proposal in a 17-page report titled, "framework for determining whether certain projectiles are 'primarily intended for sporting purposes' " -- in which the bureau evaluates the ammunition's changing status in current federal law.

"To protect the lives and safety of law enforcement officers from the threat posed by ammunition capable of penetrating a protective vest... the [existing federal law] prohibits the import, manufacture and distribution of 'armor-piercing ammunition,' " the report begins. Specifically, the ATF is referring to steel-tipped 5.56mm ammunition -- which has traditionally only been fired from .223 semiautomatic assault rifles, or AR-15s. The bureau notes that such ammunition has been deemed legal in the United States for almost 30 years because there has been a "sporting" interest among gun owners -- and because until only recently it wasn't able for use in handguns.

However, the ATF believes the introduction of a new firearm impacts the bullets' legal status. A semiautomatic pistol, based on a shortened AR-15 rifle, can fire such 5.56mm ammunition and raises a question of whether there are sufficient existing "sporting" interests with that weapon that warrant the bullets' continued legal protection.

The Gun Control Act of 1968, which was largely the result of multiple political assassinations during the 1960s, specifically prohibits armor-piercing ammunition in the United States. However, ammunition can be granted an exception to the ban if it meets certain requirements. The ATF, with the intent of updating that exemption in light of the 5.56mm handgun, ordered the report.

"The framework is intended to uphold the requirements of the statute and its goal of protecting law enforcement while respecting the interests of sportsmen and the industry," the ATF said in the report.

Armor-piercing 5.56mm and M855 "green-tipped" ammunition has been legal in the United States since passage of the Law Enforcement Officers Protection Act of 1986, the primary goal of which is to protect the nation's law enforcement officers. Under the law, any armor-piercing bullet that can be used in a handgun is illegal.

It is this distinction that makes the ammo in question susceptible to the ban. Now that a handgun exists that is capable of firing the 5.56mm projectiles, their definition may no longer earn an exemption.

In light of the production of the handguns, the ATF -- the agency charged with enforcing the Gun Control Act of 1968 -- decided to re-examine the issue.

"Applying the sporting purposes framework... the 5.56mm projectile that ATF exempted in 1986 does not qualify for an exemption," the bureau said in the report. "Because that projectile when loaded into SS109 and M855 cartridges may be used in a handgun other than a single-shot handgun."

Reports of the new ATF proposal has spurred some gun owners to purchase armor-piercing ammo in large quantities, before it becomes illegal.

"We sold out of what we had in stock," said gun store manager Ryan Cook, the Springfield (Mo.) News-Leader reported Thursday. "I might have sold four or five cases after ATF's statement came out. I called our suppliers but they said there was none available to order. It's like the ammo shortage before. People are going to panic."

RELATED Bryant Gumbel on NRA: 'They're pigs' who 'don't care about human life'

If the ammo becomes illegal, however, the bureau said citizens who retain possession of the bullets will not be in violation of the law.

The ATF said it will accept public comment regarding the matter until March 16.

U.S. News // 6 hours ago
Bomb cyclone bashes California; flooding, mudslides reported
Oct. 25 (UPI) -- Drought-ridden California was inundated with heavy rains and strong winds on Sunday and overnight by a large storm swirling off the western coast of the United States. 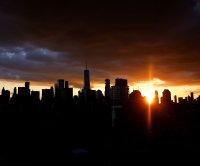 U.S. News // 16 hours ago
Rare fall nor'easter, 'miserable' weather to mark final week of October
Many in the northeastern United States have rarely had to bring out rain coats and jackets due to the lack of chilly temperatures and relatively dry conditions so far this October, but a change is in the works.