U.S. Army personnel of all ranks engage in 'dishonesty and deception'

In the study called "Lying to Ourselves: Dishonesty in the Army Profession," the War College's Strategic Studies Institute interviewed Army personnel from all ranks and found that lies permeate throughout the military institution, whether by civilians or those in uniform.

Officers sometimes face a "suffocating amount" of tasks. Often, they use phrases to make it seem as if they complied to all requirements demanded.

Personnel do this to "sugarcoat the hard reality that in the routine performance of their duties as leaders and commanders, U.S. Army officers often resort to evasion and deception," the study said.

The most highlighted rationalization to partake in dishonesty is that it is often necessary to lie because the task asked of personnel or the reporting required of them is unreasonable, irritating or "dumb."

"I think some expectation of equivocation is accepted on dumb things," one officer said.

Staff officers in the Department of the Army revealed that sometimes reports they receive aren't fully trusted. This means that personnel who request information and those who supply it know that the information is questionable, the study said.

"We don't trust our compliance data," one officer said.

Part of the reason why lying is so prevalent is because there is a psychological disconnect between performing a dishonest act and facing the consequence for it.

"A moral decision can lose its ethical overtones if the eventual repercussions of such a choice are either unknown or minimized," the study said. "For example, it is a common perception that much of the information submitted upward disappears into the ether of the Army bureaucracy."

Former Secretary of Defense Chuck Hagel sent a memo to the most senior leaders of the U.S. military last week suggesting that the military, including senior officials, needs to be accountable and have a higher ethical standard.

"The vast majority of our senior leaders are men and women who have earned the special trust and confidence afforded them by the American people," Hagel wrote. "However, when senior leaders forfeit this trust through unprofessional, unethical or morally questionable behavior, their actions have an enormously negative effect on the profession." 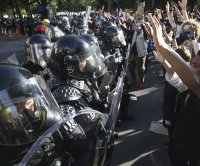