Brian Williams recants story he came under fire in Iraq

NEW YORK, Feb. 4 (UPI) -- NBC News anchor Brian Williams on Wednesday apologized for reporting that he was in a U.S. military helicopter that had drawn fire in 2003 in Iraq, when in fact he was safe in another helicopter.

On multiple occasions, Williams recalled the events of 12 years ago in which he said he was in a Chinook helicopter that drew enemy fire when he reported on the war in Iraq.

"The helicopter we were traveling in was forced down after being hit by an RPG," Williams said during last week's broadcast. "Our traveling NBC News team was rescued and kept alive by an Armored Mechanized Platoon from the U.S. Army Third Infantry."

He revisited the story last week in an effort to honor veteran Sgt. Major Tim Terpak.

But Williams drew criticisms online from those who remembered the incident differently.

"Sorry dude, I don't remember you being on my aircraft," Lance Reynolds said in a Facebook post. "I do remember you walking up about an hour after we had landed to ask me what had happened. Then I remember you guys taking back off in a different flight of Chinooks from another unit and heading to Kuwait to report your 'war story' to the 'Nightly News.' The whole time we were still stuck in Iraq trying to repair the aircraft and pulling our own security."

"Thank you, Lance! I've been calling him out on this for a long time with no response. He was actually on my aircraft, and we came in behind you about 30-45 minutes later," Miller wrote.

"I made a mistake in recalling the events of 12 years ago," he said on "Nightly News."

"I want to apologize -- I said I was traveling in an aircraft that was hit by RPG fire. I was instead in a following aircraft. We all landed after the ground fire incident and spent two harrowing nights in a sandstorm in the Iraq desert," Williams added.

"This was a bungled attempt by me to thank one special veteran, and by extension, our brave military men and women, veterans everywhere, those who have served while I did not," he said. "I hope they know they have my greatest respect, and also now my apology."

U.S. News // 7 hours ago
Democrats propose creation of monument for Ruth Bader Ginsburg on Capitol Hill
March 2 (UPI) -- Democrats in the House and Senate on Tuesday introduced a bill proposing the construction of a monument honoring the late Supreme Court Justice Ruth Bader Ginsburg at the Capitol.

U.S. News // 8 hours ago
Pentagon report warns extremists use military to boost legitimacy, combat skill
March 2 (UPI) -- A Department of Defense report released on Tuesday warned that members of White supremacist and other extremist groups covet military members to increase the legitimacy of their cause and ability to carry out attacks.

U.S. News // 10 hours ago
Neera Tanden withdraws nomination as budget director
March 2 (UPI) -- Neera Tanden withdrew her name from consideration to be director of the Office of Management and Budget after facing scrutiny over her past tweets critical of lawmakers, President Joe Biden announced Tuesday. 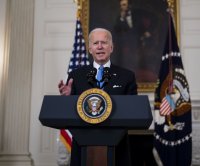 U.S. News // 21 hours ago
Biden promises every adult can be vaccinated by end of May
March 2 (UPI) -- President Joe Biden said Tuesday there will be enough COVID-19 vaccines for every adult in the United States to be fully vaccinated by the end of May, two months sooner than previously expected.

U.S. News // 23 hours ago
Wray: Social media was one of the catalysts for Jan. 6 attack
March 2 (UPI) -- The head of the Federal Bureau of Investigation appeared in the Senate on Tuesday to testify about the Jan. 6 attack on the U.S. Capitol -- six months after he warned Congress about rising domestic extremism.