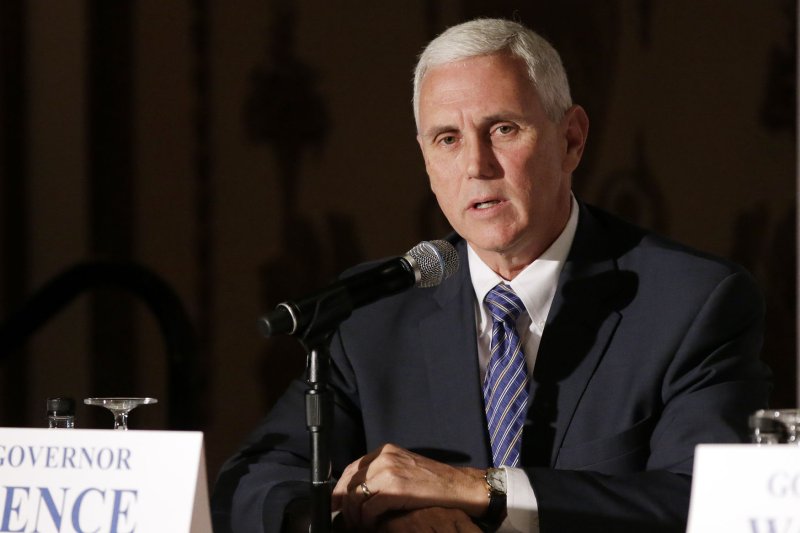 Indiana Governor Mike Pence says his plan to start Just IN was misunderstood and that it wouldn't be a state-run media outlet. File photo by John Angelillo/UPI. | License Photo

INDIANAPOLIS, Jan. 28 (UPI) -- Indiana Gov. Mike Pence said reports that he is starting a state-run media outlet are a "misunderstanding" and that the website is really just "a one-stop shopping website for press releases and information."

The Republican governor came under fire Tuesday after The Indianapolis Star -- based on state documents -- reported Pence planned to start his news website, Just IN, in February. The site will be overseen by former Star reporter Bill McCleery and will include feature stories and news releases written by state press secretaries.

Pence played down what appeared to be his intentions to start a state-run and funded news site.

"Reports that this was intended to be a news agency, I think just represent an understandable misunderstanding based on some internal communications that I read about in the press," he said Tuesday.

"My understanding is that the website that has become a source of controversy was simply to have a one-stop-shopping website for press releases and information," he said. "It's meant to be a resource, not a news source, and we'll be clarifying that in the days ahead."

Denault said staff may write feature stories for the website, but they would focus on things like a profile of a veteran Bureau of Motor Vehicle clerk.

Pence's announcement Tuesday garnered comparisons of the governor to the leaders of other governments that make use of state-run media outlets, like Vladimir Putin in Russia and Kim Jong Un in North Korea.

"I think there are some very clever media out there," Denault said of the comparisons. "I certainly understand the sentiment."

She said she planned to speak with the Society of Professional Journalists, which issued a statement Tuesday saying it would monitor Just IN.

"One must wonder if a government-run publication, which is paid for by taxpayers, could ever be more than a marketing service for those who control the purse strings," SPJ Ethics Committee Chair Andrew Seaman said. "If history has any lesson, it's that there is no Democracy without a free press. It's the Society's position that the press is not free when elected officials serve as editor and publisher."

The controversy comes as Pence's name is coming up in connection with a possible 2016 presidential bid. His mother, Nancy Pence Fritsch, on Tuesday said that while she would like to see him be president one day, now isn't the right time.

"Not right now. I want him to be my governor for two terms," she told the Terre Haute Tribune Star.

U.S. News // 9 hours ago
Six dead, including unborn child, in Indianapolis 'mass murder'
Jan. 24 (UPI) -- At least six people were killed and one person was in critical condition after what police believe was a targeted mass murder in Indianapolis on Sunday morning.