Any possessions belonging to Nancy and Adam Lanza that were still in their home were burned when a bank took possession of it. 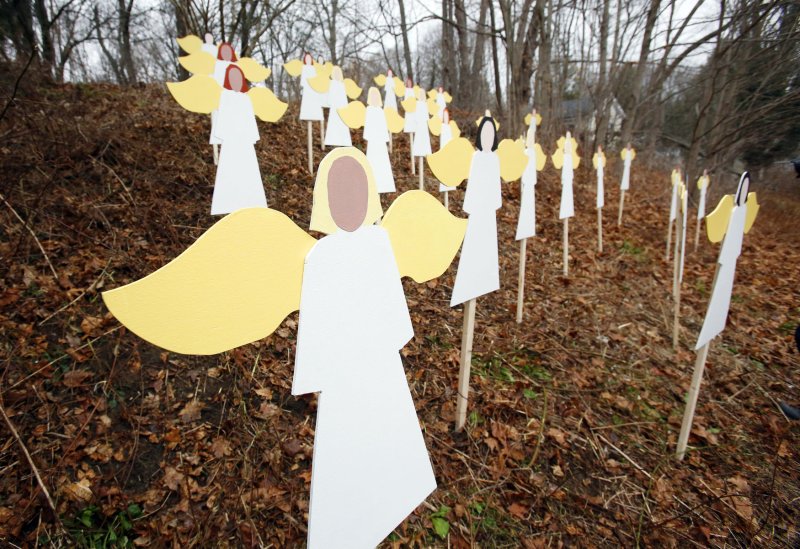 A memorial to the six staffers and 20 children killed at the Sandy Hook Elementary School was set up on a Newtown, Conn., hillside after the December 2012 massacre. Adam Lanza, who shot his mother first and took his own life as police closed in, and his mother, Nancy, are not included. UPI/John Angelillo | License Photo

NEWTOWN, Conn., Jan. 21 (UPI) -- The city of Newton, Conn., on Wednesday voted to demolish the home of Adam Lanza, where he shot his mother dead before the massacre at Sandy Hook Elementary School.

The town now owns the house, receiving it last year from the bank that held Nancy Lanza's mortgage. The Newton Legislative Council voted to tear it down, a move already approved by the Board of Selectmen.

The decision must now go back to the Board of Selectmen for final approval.

Mary Ann Jacob, who heads the council, was a library aide at Sandy Hook when Adam Lanza killed 20 children and six of her colleagues.

Neil Heslin, whose son, Jesse Lewis, 6, was killed, called demolition "the best decision," although he said he is indifferent.

"Personally to me, it doesn't bother me whether the house remains there or whether it's torn down," Heslin said. "With what I've been through, that's so insignificant to everything else."

Officials have not decided what to do with the 2-acre property when the house is gone. The property is next to a wooded area owned by the town.

It is expected to cost about $29,000 to raze the house and the council is also considering placing a limitation on the deed that the proceeds from any sale or development of the property would go back to the victims of the massacre.

Randall Bell, a consultant on crime scene property who advised Hudson City Savings Bank, said that all of Adam and Nancy Lanza's belongings still in the house when the bank took possession were burned.

RELATED FBI: Mass shootings in the U.S. have nearly tripled annually since 2006

The massacre in December 2012 continues to haunt Newtown. The families of two of the dead children, including Jesse Lewis, have filed lawsuits blaming officials for poor security at Sandy Hook.

On Tuesday, the Newtown Action Alliance and the Connecticut Citizens Defense League held dueling rallies outside the headquarters of the National Shooting Sports Federation, which is three miles from Sandy Hook. NSSF officials were in Las Vegas, where a major trade show opened Tuesday.

Po Murray, who heads the alliance, said the NSSF should not continue to support ownership of semi-automatic assault rifles. Adam Lanza used a Bushmaster AR-15 at Sandy Hook.

"We wanted to give the NSSF another opportunity to become a responsible trade association," she said.

"We have the most comprehensive anti-gun legislation," he said. "Now they won't stop. It just seems as if they don't want law-abiding citizens to have guns in any shape or form."

U.S. News // 1 hour ago
FDA halts use of Regeneron, Eli Lilly antibody COVID-19 treatments
Jan. 24 (UPI) -- The Food and Drug Administration on Monday halted use of monoclonal antibody treatments from Regeneron and Eli Lilly, stating they are ineffective against the Omicron COVID-19 variant.

U.S. News // 9 hours ago
3 firefighters killed, another critically injured in Baltimore roof collapse
Jan. 24 (UPI) -- Three Baltimore firefighters were killed and another was trapped Monday when a roof collapsed during a two-alarm fire at a vacant home, fire officials said.

U.S. News // 7 hours ago
House lawmakers call for ban of stock trading by Congress members
Jan. 24 (UPI) -- A new letter signed by 27 members of the House asks that members of Congress be banned from trading or owning stocks.
Advertisement