Tensions between the NYPD and de Blasio have been high during protests and after the police murders. 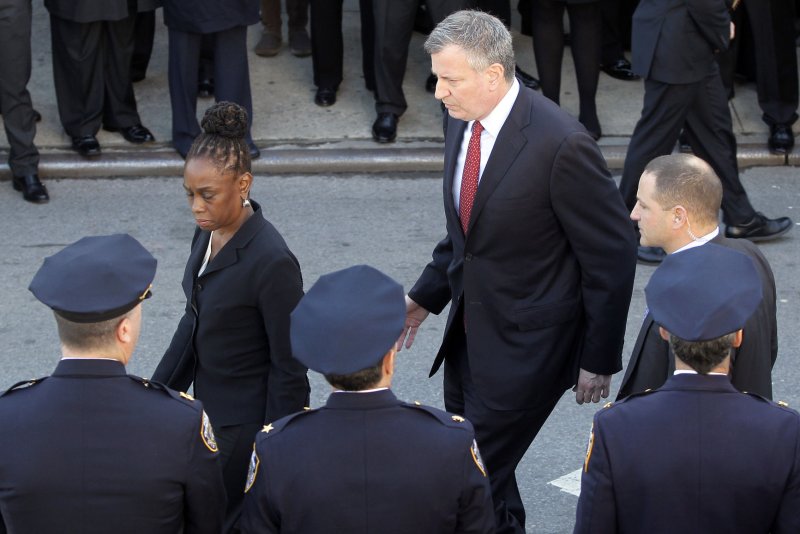 Mayor Bill de Blasio and Chirlane McCray exit the church following the funeral of New York Police Officer Rafael Ramos at Christ Tabernacle Church in New York City on December 27, 2014. Officer Rafael Ramos along with officer Wenjian Liu were shot dead one week ago as they sat in their marked patrol car at the corner of Myrtle Avenue and Tompkins Avenue in Bedford-Stuyvesant, Brooklyn. UPI/John Angelillo | License Photo

The funeral featured guests like Vice President Joe Biden, Bill de Blasio, New York Gov. Andrew Cuomo and Police Commissioner William Bratton. Each spoke of the tragedy and the need to move forward. Bratton named Ramos the honorary department chaplain for the NYPD's 84th precinct, which is a position he had been working toward. Ramos and Wenjian Liu, the other officer who was killed, both received posthumous promotions to Detective First Grade from Bratton.

The funeral took place at the Christ Tabernacle Church in Queens, New York. Ramos and Liu were killed by 28-year-old Ismaaiyl Brinsley while they were sitting in their cruiser, and he killed himself after the murders.

Reports say police officers from New York and around the country who attended the funeral turned their backs to de Blasio while he spoke, seemingly because they don't believe he has been supportive to the NYPD during protests related to Eric Garner's death and during the aftermath of the officers' murders.

Some police officers turned their backs on Bill DeBlasio as he spoke at Rafael Ramo... https://t.co/hK7atJ6uBz pic.twitter.com/GKtDtXqeHO