Arizona Gov. Jan Brewer has 'no regrets' as she leaves office

"The name-calling and the signs and all the brouhaha, that I believe was generated mostly by the media," Brewer said of her controversial legacy opposing undocumented immigrant's rights.

PHOENIX, Dec. 23 (UPI) -- As Arizona Gov. Jan Brewer prepares to leave office, the sometimes-controversial Republican says she has no regrets about her six years in Arizona's statehouse.

"I would want to be remembered as being a good governor, being honest, being a truth-teller and doing what I believe is the right thing for all people in the state of Arizona," Brewer told Arizona's 3TV.

Nationally, Brewer is most known for not vetoing Arizona SB1070, a 2010 bill that allows law enforcement to ask citizens for proof of citizenship based only on officer suspicion. At the time, it was the strictest anti-immigration law in the United States.

"When I signed SB1070 I had no idea that it was going to have the impact that it did have; it was huge. It was unbelievable in a lot of people's minds for a lot of different reasons."

Although popular among Arizona Republicans, SB1070 drew criticism from human rights advocates, who felt it gave police a blank check to profile Latinos.

"At first I tried to defend myself. The name-calling and the signs and all the brouhaha, that I believe was generated mostly by the media."

Immigration proved a consistent trend of Brewer's tenure in Phoenix, as Brewer found herself on the losing end of a fight to keep undocumented immigrants from being able to receive driver's licenses in Arizona.

"It's not me, Jan Brewer, that's not allowing them to do [get a driver's license]," says Brewer

"I'm upholding the law, which was written. And their families knew, when they brought them or when they came here themselves that they were coming illegally."

Despite Brewer's claims, U.S. District Court ruled she was not upholding the law by denying driver's licensees to non-U.S. citizens, and the Supreme Court subsequently refused to hear Arizona's appeal. 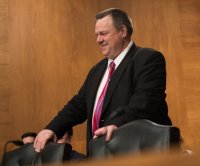