Ann Hart, chairwoman of the African American Police Advisory for South Phoenix: "It gives the impression that it's open season for killing black men. We need to take a deeper dive into why police officers are feeling compelled to shoot and kill as opposed to apprehend and detain, arrest and jail.” 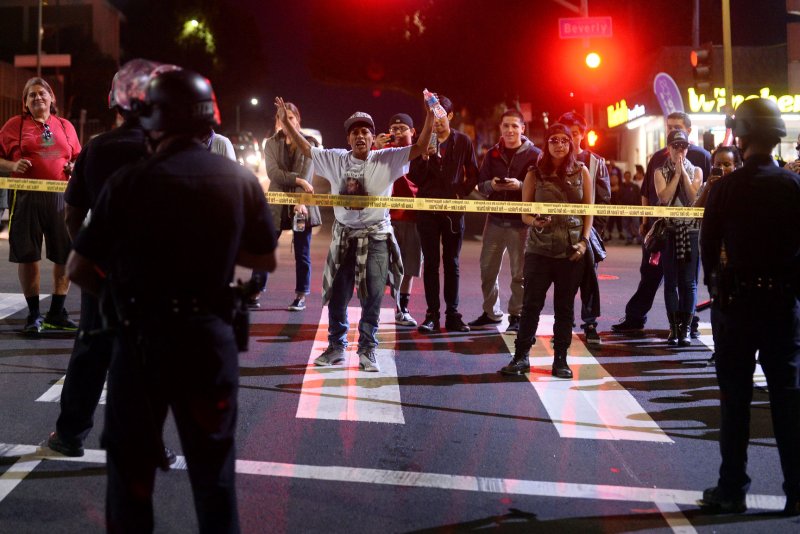 BOSTON, Dec. 4 (UPI) -- Hillary Clinton spoke on race relations Thursday, expressing her hope that recent widespread outrage and protest over grand juries' failure to indict officers in the deaths of both Michael Brown and Eric Garner would lead to an opportunity for America to have a meaningful dialogue and healing around race relations and law enforcement.

The former first lady and Secretary of State was addressing a sold-out conference on women's issues at the Boston Convention and Exhibition Center. But speaking to the more than 10,000 registered attendees, her keynote to the Massachusetts Conference for Women began not with a discussion of gender, but one of race, as she brought up the deaths of Brown and Garner.

Clinton's address came a little over a week after a grand jury in Ferguson, Mo. declined to indict officer Darren Wilson in the shooting death of Brown and just one day after a New York grand jury failed to indict the officer who was filmed placing Garner in a procedurally prohibited chokehold.

Clinton warned against the militarization of the police and lamented the disproportionate incarceration rates of black males.

"When one stops and realizes a third of all black men face the prospect of prison during their lifetimes, what devastating consequences that has for their families and their communities and all of us. These tragedies did not happen in some far away place; they didn't happen to some other people. These are our streets, our children, our fellow Americans and our grief."

The likely 2016 presidential candidate's comment comes amid nationwide protests -- demonstrations still raging in response to Ferguson, stoked by yesterdays announcement regarding Garner's case -- and follows on the heels of other headlines Thursday that echo the national narrative of excessive force ending early the lives of minority males.

Tuesday evening Rumain Brisbon, 34, an unarmed black male, was shot and killed by police in a Phoenix suburb.

In an effort to be transparent in light of the unrest that followed Brown's shooting in Ferguson, Phoenix police quickly released a detailed account of the killing.

According to authorities, Brisbon was confronted by officers who were responding to a burglary call after bystanders reported that men in a black SUV -- a description matching the vehicle Brisbon was occupying at the time -- were dealing drugs.

Brisbon purportedly fled on foot toward a nearby apartment building with his hands in his pockets, a chase ensued, and, after an officer caught up with Brisbon outside the door to an apartment, a struggle.

"The officer believed he felt the handle of a gun while holding the suspect's hand in his pocket," he added.

At that moment, a woman inside opened the door and Brisbon and the officer tumbled inside where two small children were in a back bedroom.

The officer, who could no longer keep control of Brisbon's hand, fearing Brisbon had a firearm, fired two shots, killing Brisbon.

The gun handle the officer felt in Brisbon's pocket was actually bottle of pain killers.

"I would like to think that in our officer-involved shootings, that we are transparent as we can be as an organization," Crump said.

"We always have been and always will be concerned about what it is that our residents think about our role in this community and the levels of force that we use," he added. But already, witnesses are offering conflicting chronicles of Brisbon's death.

"There are numerous witnesses that will challenge the police officer's account of what transpired," Marci Kratter, a Phoenix attorney representing Brisbon's family said.

"It was a senseless tragedy. He was unarmed and not a threat to anyone. We intend to pursue this to the full extent of the law," she added.

"It gives the impression that it's open season for killing black men," Ann Hart, chairwoman of the African American Police Advisory for South Phoenix said.

"We need to take a deeper dive into why police officers are feeling compelled to shoot and kill as opposed to apprehend and detain, arrest and jail," Hart added.

And as Clinton gave her speech on race relations and the militarization of police, the chief of the Los Angeles Police Department announced three officers were to blame in the shooting death of an unarmed veteran, 51-year-old Brian Newt Beaird, in 2013.

U.S. News // 10 minutes ago
Army identifies soldiers killed by falling tree in Georgia
Aug. 11 (UPI) -- U.S. Army officials have confirmed the identities of two soldiers who were killed Tuesday when they were struck by a falling tree during training in Georgia.

U.S. News // 2 hours ago
Grand jury charges man with hate crimes for Dallas Koreatown salon shooting
Aug. 11 (UPI) -- A grand jury in Texas has indicted the man accused of shooting up a Dallas hair salon in May on hate crime charges.

U.S. News // 3 hours ago
3 dead, dozens of homes damaged in Indiana house explosion
Aug. 11 (UPI) -- At least three people were killed and more than 35 homes were damaged in an explosion that rocked the small community of Evansville, Ind., authorities said.

U.S. News // 4 hours ago
Lindsey Graham seeks to dismiss 2020 Georgia election grand jury subpoena
Aug. 10 (UPI) -- Attorneys for Sen. Lindsey Graham on Wednesday argued that he is immune from a subpoena compelling him to testify before a special grand jury in Georgia about possible 2020 election interference.