"We have not been good stewards of this natural resource," laments Toledo Mayor D. Michael Collins.

TOLEDO, Ohio, Aug. 4 (UPI) -- The mayor of Toledo lifted a county-wide water ban, saying water from Lake Erie is again safe to drink and no longer shows signs of contamination.

"Our water is safe," Mayor D. Michael Collins declared Monday, allowing the 400,000 Toledo-area residents to use their tap water, after toxins were detected Friday, triggering Gov. John Kasich to declare a state of emergency.

Although no illnesses were reported, the threat of microcystis, a toxin resulting from algae bloom in Lake Erie, was so great that residents were asked to not even boil water or give it to their pets, creating bottled water shortages at area retailers.

Kroger in Toledo, Ohio after 400,000 or so residents are told to not touch or drink tap water pic.twitter.com/xc9K9bVz2M

Earlier Monday, Collins said most of the water supply was under control and drinkable, but two neighborhoods remained affected. Those areas now read "non-detectable" levels of microcystis.

Residents are asked to run their water for 15 minutes before resuming normal consumption and use.

"We have not been good stewards of this natural resource," Collins said, pointing a finger at community waste runoff as causing the algae growth in Lake Erie and urging lawmakers to take action on environmental policy.

RELATED Toledo, Ohio: Do not drink, do not boil water

"It's time to stop talking about this western basin of Lake Erie, and start doing something about it. The politics must stop."

U.S. News // 41 minutes ago
Facebook announces new financial team for online payments
Aug. 10 (UPI) -- Facebook unveiled Monday a new leadership team for its online payment service ahead of a broad roll out in the United States.

U.S. News // 1 hour ago
U.S. deficit "more than tripled" because of coronavirus rescue spending, report says
Aug. 10 (UPI) -- The federal budget deficit tripled in the first 10 months of fiscal year 2020, up to $2.8 trillion compared with $0.9 trillion during the same period last year, the U.S. Congressional Budget Office said in a report.

U.S. News // 3 hours ago
TSA 'alarmed' by surge in firearm seizures at U.S. airports in July
Aug. 10 (UPI) -- Amid decreased air travel in the United States due to the COVID-19 pandemic, screeners have found more handguns in carry-on bags at airports nationwide this summer, federal officials said Monday.

U.S. News // 5 hours ago
Major gas explosion destroys 3 homes in Baltimore; at least 1 dead
Aug. 10 (UPI) -- At least one person was killed and multiple others were injured in Baltimore Monday by a natural gas explosion that destroyed three homes, authorities said.

U.S. News // 5 hours ago
Democrats, Republicans hope for COVID-19 relief bill this week
Aug. 10 (UPI) -- Democratic and White House negotiators have yet to resume talks Monday toward finding an agreement on the next round COVID-19 relief, but both sides are hopeful for a deal this week.

U.S. News // 6 hours ago
McDonald's sues ex-CEO over sexual relations with workers
Aug. 10 (UPI) -- McDonald's is suing former CEO Steve Easterbrook, saying lies that he told about sexual relationships with employees prompted the company to give him a substantial payout, according to documents filed Monday. 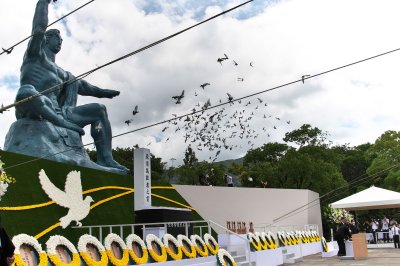