Adam Kwasman saw kids on a bus headed to YMCA camp and mistook them for migrant children being transferred by the Department of Health and Human Services.

WASHINGTON, July 16 (UPI) -- A Republican congressional candidate got a chance to protest as busloads of undocumented immigrant children were taken to a shelter near Oracle, Arizona.

"I was actually able to see some of the children in the buses," lamented Adam Kwasman, a state legislator. "The fear on their faces.... This is not compassion."

The only problem? The children weren't migrants: They were local students going to summer camp.

Protesters in Pinal County had gathered Tuesday afternoon to express their disapproval over the government's response to the influx of children entering the country fleeing violence from Central America. Between 40 and 60 children were destined for the Sycamore Canyon Academy, a boys ranch in the Catalina Mountains, but they never showed.

The Department of Health and Human Services, responsible for caring for migrant children once they've been processed, had no immediate word on where the children were taken instead.

When the buses arrived, instead full of school children from the Marana school district and heading to the YMCA Triangle Y Camp, Kwasman raced over and tweeted a picture of the back of the yellow bus.

When Kwasman was confronted by a reporter with the truth -- that these were local children -- he said: "Well, they were sad too."

Other eyewitnesses said the children were seen laughing and taking pictures of the protesters.

Kwasman is running for the 1st Congressional District, and will face state House Speaker Andy Tobin and businessman Gary Kiehne in the Republican primary. The winner will face incumbent Rep. Ann Kirkpatrick, a Democrat.

RELATED Obama asks Congress for $3.7b for unaccompanied immigrant crisis

U.S. News // 1 minute ago
Millions of U.S. workers still must make tax payments by deadline Thursday
April 15 (UPI) -- While most Americans don't have to file their taxes by Thursday, which is the traditional Tax Day in the United States, there are millions of people who still have to make the April 15 deadline. 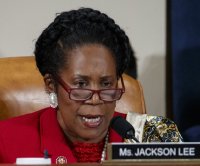 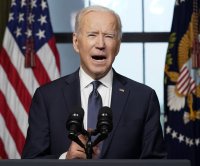 U.S. News // 11 hours ago
Capitol rioter accused of beating officer to be jailed until trial
April 14 (UPI) -- Jeffrey Sabol, a Colorado man accused of beating an officer who was treating injured rioters during the Jan. 6 insurrection at the Capitol, was ordered to remain in jail until his trial.

U.S. News // 12 hours ago
CDC: Empty middle seats on planes can reduce COVID-19 exposure by up to 57%
April 14 (UPI) -- The Centers for Disease Control and Prevention released a study Wednesday stating that leaving middle seats open on aircraft can reduce exposure to COVID-19 between 23% and 57%. 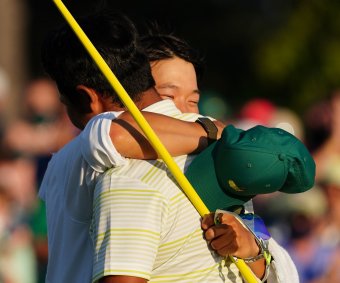