Judge orders appropriate IRS official to file declaration on lost emails sworn under oath to be the truth under penalty of perjury.

Left to right, J. Russell George, Treasury Inspector General for Tax Administration, Douglas Shulman, Former Internal Revenue Service (IRS) Commissioner, Lois Lerner, Director of Exempt Organizations for the IRS, and Neal S. Wolin, Deputy Secretary of the U.S. Department of the Treasury, are sworn-in during a House Oversight and Governmental Reform Committee hearing on the IRS and it's targeting of conservative groups, on Capitol Hill. A federal judge ruled Thursday that the IRS must explain under oath what happened to the Lois Lerner emails the agency claims are lost. UPI/Kevin Dietsch | License Photo

WASHINGTON, July 10 (UPI) -- In a ruling Thursday, U.S. District Judge Emmet G. Sullivan ordered the IRS to explain "under oath" exactly how the agency lost track of the now infamous Lois Lerner emails and exactly what the agency has done to recover the correspondence.

Lois Lerner, an IRS official accused of targeting conservative groups like the Tea Party for extra scrutiny in order to deny them tax exempt status and limit their influence on the 2012 election, has already pleaded the fifth amendment and refused to testify on the matter, for which she was held in contempt of court.

The federal judge—in response to a Freedom of Information Act (FOIA) lawsuit brought by conservative watchdog group Judicial Watch—gave the IRS until Aug.10 to file a declaration addressing the purported computer issues and the steps taken to solve them, ordering that the document be signed and sworn under oath to be the truth under penalty of perjury by "appropriate" IRS officials.

According to Politico, the judge said the document should also address steps taken to recover the emails and will help the court decide whether the invocation of limited discovery requested by Judicial Watch is necessary.

Sullivan also declared that the IRS must meet with Judicial Watch and Magistrate Judge John Facciola to review the steps so far taken to recover the lost correspondence and address how the agency might obtain the emails from other sources, something Judicial Watch has experience with after using FOIA to retrieve emails concerning the controversy over the Benghazi killings.

U.S. News // 2 hours ago
Search underway for 4 fishermen after boat sinks in Atlantic
Nov. 23 (UPI) -- The U.S. Coast Guard said a search was underway Monday for four fishermen after their boat sank off the coast of Massachusetts. 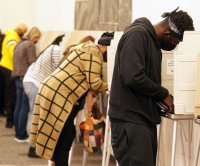