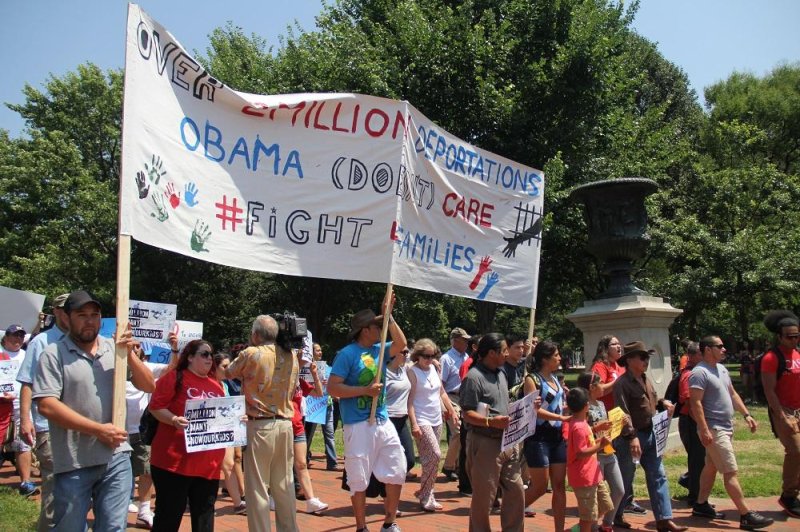 Cindy Monge, 19, has DACA status and is an activist for immigrant rights in Maryland. (Dima Ansari/MNS)

WASHINGTON, July 7 (UPI) -- About 100 advocates for immigrant families and children protested outside the White House Monday, calling on President Barack Obama to quickly make good on his pledge to use executive orders to move immigration reform forward, especially to help the thousands of children crossing the border.

"From what I understand is that the president is going to launch an executive order in the next two months and that is important because it's going to stop the deportation of millions and millions of people," said Gustavo Torres, the executive director of CASA de Maryland, an advocacy organization for immigrant rights, as he led the protesters in a march in front of the White House.

The protesters were reacting to the recent news that thousands of children from Central America have been crossing the Mexican border into the U.S. alone, a number that is expected to reach 90,000.

Obama announced last week that he is requesting help from Congress to bolster the border patrol for deportation and reinforcement.

"I came here for a better life and to re-unite with my parents," said Cindy Monge, 19, who entered the country illegally but obtained legal status through the Deferred Action of Childhood Arrivals program created several years ago. "I fought for the Maryland Dream Act."

Ana Sol Gutierrez, Democrat and member of the Maryland House of Delegates, said politicians need to focus more on the well-being of the immigrant children.

But a pedestrian passing by the rally shouted, "Stop them from coming in illegally into the United States of America."

It is not clear whether the Obama administration intends to give amnesty to the children or deport them.

In an interview with "Meet the Press" on Sunday, Homeland Security Secretary Jeh Johnson repeatedly said the goal of the Obama administration is to "stem this tide" of children crossing the border, but was vague about whether these children will be allowed to stay in the United States.

"Over the past several weeks, I have been calling on the president to take immediate, decisive action to address the unprecedented number of children being illegally smuggled across the southern border," Miller said in an emailed statement.

According to Miller, she has called on Obama to implement a "robust" educational campaign in Central America.

U.S. News // 1 hour ago
Ex-cop Derek Chauvin chooses not to testify in trial for George Floyd's death
April 15 (UPI) -- Defense attorneys in the criminal trial of former Minneapolis police officer Derek Chauvin rested on Thursday, without Chauvin taking the stand to defend himself against charges over the death of George Floyd last year.

U.S. News // 2 hours ago
Capitol Police IG says dept. needs reform, culture change after Jan. 6 attack
April 15 (UPI) -- Officers were not prepared to deal with the mob that attacked the U.S. Capitol on Jan. 6, despite warnings of potential violence, according to congressional testimony from the Capitol Police inspector general.

U.S. News // 2 hours ago
Disneyland begins selling tickets for park's reopening this month
April 15 (UPI) -- Disneyland is still a couple weeks away from its grand reopening, but tickets to return to the family resort for the first time in more than a year went on sale Thursday.

U.S. News // 3 hours ago
Retail sales in U.S. surge by 10% in March; jobless claims way down
April 15 (UPI) -- Americans appear to have used some of their stimulus cash at retail outlets last month, as sales nationwide surged by an explosive 10%, according to government figures Thursday.

U.S. News // 6 hours ago
Millions of U.S. workers still must make tax payments by deadline Thursday
April 15 (UPI) -- While most Americans don't have to file their taxes by Thursday, which is the traditional Tax Day in the United States, there are millions of people who still have to make the April 15 deadline.

U.S. News // 9 hours ago
House panel approves bill to pave way for slavery reparations
April 15 (UPI) -- A House committee approved legislation late Wednesday to pave the way for reparations to ancestors of enslaved Black Americans, though the bill has an uphill battle to become law.