Supreme Court: Cellphones can't be searched without a warrant

"Modern cell phones, as a category, implicate privacy concerns far beyond those implicated by the search of a cigarette pack, a wallet, or a purse," writes Chief Justice John Roberts.

WASHINGTON, June 25 (UPI) -- The U.S. Supreme Court ruled unanimously Wednesday that police cannot search the cellular phones of individuals who have been stopped or arrested without first obtaining a warrant.

Although police can search individuals for objects on their person, such as drugs or weapons, Chief Justice John Roberts ruled that the breadth and sensitivity of information stored on a cellphone is incomparable.

"That is like saying a ride on horseback is materially indistinguishable from a flight to the moon," Roberts wrote.

"Both are ways of getting from point A to point B, but little else justifies lumping them together. Modern cell phones, as a category, implicate privacy concerns far beyond those implicated by the search of a cigarette pack, a wallet, or a purse."

Roberts also noted that many smartphone users in the cloud age are unaware of how much personal data is accessible from their phones.

"Cell phone users often may not know whether particular information is stored on the device or in the cloud, and it generally makes little difference," the chief justice pointed out.

"Moreover, the same type of data may be stored locally on the device for one user and in the cloud for another ... Officers searching a phone's data would not typically know whether the information they are viewing was stored locally at the time of the arrest or has been pulled from the cloud."

American Civil Liberties Union national legal director Steven Shapiro praised the decision, saying in a statement, "We have entered a new world but, as the court today recognised, our old values still apply and limit the government's ability to rummage through the intimate details of our private lives."

This is how SCOTUS refers to sexting: pic.twitter.com/ZGgeQvlSJl

U.S. News // 42 minutes ago
Australians get drunk more often than any other nation's citizens, survey says
Dec. 3 (UPI) -- When it comes to having too much to drink, no country does it more often than Australia, according to this year's Global Drug Survey.

U.S. News // 5 hours ago
U.S. added fewer jobs than expected in Nov.; Biden points to rising wages
Dec. 3 (UPI) -- The U.S. economy added a little more than 200,000 jobs during the month of November, the Labor Department said in its monthly assessment Friday -- roughly half what most analysts expected.

U.S. News // 3 hours ago
Prosecutors charge parents of Michigan teen for school shooting that killed 4
Dec. 3 (UPI) -- Both parents of the Michigan teenager accused of killing four classmates at a high school this week have been criminally charged in the shooting attack, authorities said Friday. 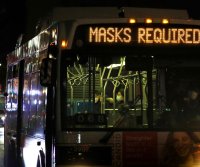 U.S. News // 6 hours ago
Senate passes resolution to avoid shutdown, fund gov't until February
Dec. 3 (UPI) -- President Joe Biden is expected to sign a short-term government funding bill on Friday after the Senate passed the stopgap measure to avoid the threat of a federal shutdown.

U.S. News // 10 hours ago
Police arrest suspect in shooting death of Jacqueline Avant
Dec. 3 (UPI) -- Police in California said they have arrested a 29-year-old man in connection to the fatal shooting of philanthropist Jacqueline Avant.
Advertisement