Cantor to step down as majority leader

Aides familiar with Cantor's decision said the majority leader would announce his resignation after a Republican caucus meeting Wednesday afternoon. 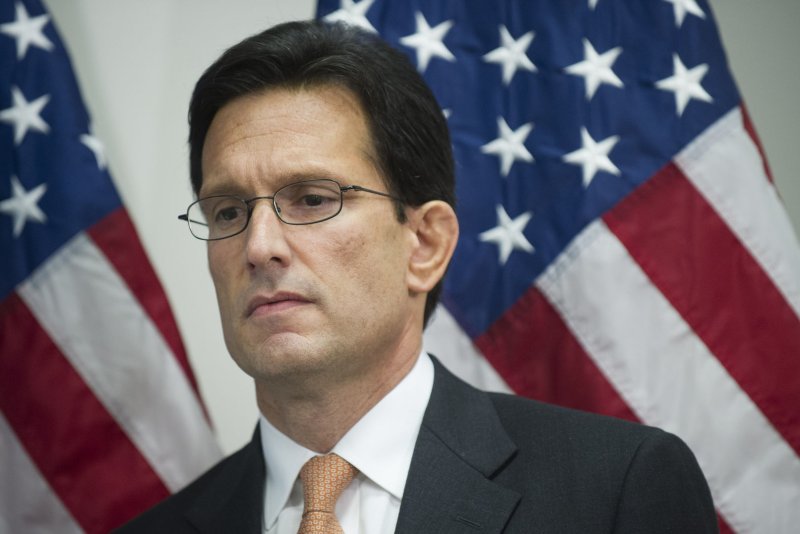 After losing his primary election bid in Virginia, House Majority Leader Eric Cantor said he would step down from the role in July. UPI/Kevin Dietsch | License Photo

WASHINGTON, June 11 (UPI) -- Following his stunning primary defeat Tuesday night, Eric Cantor will step down from his post as majority leader in July.

Cantor will formally announce his decision to colleagues after the Republican House caucus meets on Wednesday afternoon at the Capitol.

The seven-term congressman lost his bid for re-election to Virginia's 7th District in an unexpected drubbing by tea party conservative Dave Brat, an economics professor at a small college near Richmond.

Cantor's loss leaves a gap in the House leadership, where he was widely expected to ascend to the speakership upon the retirement of Speaker John Boehner. Majority Whip Kevin McCarthy, R-Calif., would be the natural heir to the position, but a number of the more conservative members of the caucus are expected to attempt to take a position.

Aides to McCarthy said he was unwilling to say, even behind closed doors, if he would run for the majority leader post, as he was still reeling from the surprise of Cantor's defeat. He instead spent the morning speaking with other members, thanking them for encouraging him to run but declining to confirm any plans to do so.

Rep. Pete Sessions of Texas, the House Rules Committee chairman and a longtime foe of McCarthy, is also expected to vie for the job, having faced off in a race for the whip position in 2010. Rep. Peter Roksam, R-Ill., the chief deputy whip, told friends Wednesday he planned to run for whip and support McCarthy in a bid for majority leader.

U.S. News // 20 hours ago
Plummeting temperatures to yield rapid freeze-up in southeastern U.S.
Now that snow and ice have come to an end across the Southeast and mid-Atlantic coast as of late Saturday morning, meteorologists are concerned for a rapid freeze-up Saturday night into Sunday morning in the region.