More than 57,000 veterans waiting for first appointment according to VA audit

Iraq and Afghanistan Veterans of America: “This audit is absolutely infuriating, and underscores the depth of this scandal.”

WASHINGTON, June 9 (UPI) -- According to an internal audit of the Department of Veterans Affairs, more than 57,000 veterans have been waiting at least 90 days for an initial medical appointment.

An additional 64,000 vets who enrolled for VA healthcare over the last decade were never seen by a doctor, according to the audit.

The VA released the results of the audit Monday in a 54-page report on the scheduling practices that caused the scandal the department is addressing. If you're just tuning in: several VA medical centers have been destroying and falsifying records to hide the long wait times faced by veterans seeking care.

"This behavior runs counter to VA's core values," the report reads. "The overarching environment and culture which allowed this state of practice to take root must be confronted head-on."

The report said the VA's goal of providing veterans an initial appointment within 14 days is unattainable due to increasing demands for care and a lack of providers.

"This audit is absolutely infuriating, and underscores the depth of this scandal," said Paul Rieckhoff, chief executive of Iraq and Afghanistan Veterans of America.

"Evidence of secret waiting times, falsification of records, destruction of documents, and other potential criminal wrongdoing has appalled and angered the nation, and imperiled trust and confidence in the Veterans Health Administration," reads a letter signed by 21 Senators to Attorney General Eric Holder demanding the Justice Department conduct a criminal investigation of the VA scandal.

"The spreading and growing scale of apparent criminal wrongdoing is fast outpacing the criminal investigative resources of the IG, and the revelations in the interim report only highlight the urgency of involvement by the Department of Justice," the Senators wrote. "This challenge requires resources that only the Department of Justice can provide in developing and assessing evidence, pursuing leads, and initiating active prosecutions aggressively if warranted."

Sloan Gibson, acting VA Secretary in the wake of Eric Shinseki's resignation from the post as a result of this scandal, said Monday these problems "demand immediate action."

"I will not be part of some effort to maintain the status quo here," said Gibson, outlining the steps the VA is taking to address the issue and promising the department would earn back trust one vet at a time, because veterans deserve to have "full faith in their VA." 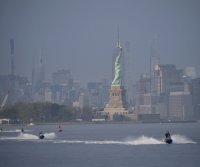