Hillary Clinton's book tour looks a lot like a campaign

Hillary Clinton says she hasn't yet made up her mind about running in 2016, but the former Secretary of State's 'Hard Choices' book tour has the look and feel of a presidential campaign.

WASHINGTON, June 9 (UPI) -- It's not a presidential campaign, exactly, but when Hillary Clinton launches her book tour this week, expect it to feel a lot like a rehearsal for 2016.

Clinton will head out on the road to promote her memoir, Hard Choices, a look at her time as secretary of state, starting with an interview with ABC's Diane Sawyer, to air Monday night. She'll visit New York, Chicago, Philadelphia, and the Washington, D.C., area this week, and she'll be trailed by the (officially unassociated) Ready For Hillary bus and a swarm of reporters rivaling a full-fledged campaign.

But even though the Hard Choices tour will look an awful lot like a campaign, it's not one -- yet.

In recent weeks, Clinton has become somewhat less cagey about her plans for a potential presidential run, while maintaining that she hasn't made up her mind.

RELATED Senate candidate to walk the length of Maine

In an excerpt from her ABC interview, Clinton says the book tour is meant to let her "help in the midterm elections in the fall and then take a deep breath and kind of go through my pluses and minuses."

She says she's in no hurry to make that choice, perhaps into 2015, "when it feels right for me to decide," and that other Democrats shouldn't wait on her decision and "do whatever they choose to do."

Clinton has also opened up about her health -- an issue Republicans hope will drag down the 66-year-old's presidential chances -- promising to release her medical records and describing her 2012 concussion. And the tour's fast-paced schedule will speak for her as well: Next week, she'll head to Toronto, Edmonton and Alberta, Canada; along with Cambridge, Mass., Los Angeles and Austin, Texas. Additional stops this month include San Francisco, San Diego, and Denver.

She'll tackle the attacks in Benghazi, Libya, head-on, as Republicans hope to turn her handling of the events that left Ambassador Chris Stevens and three other Americans dead into an albatross that would sink her campaign. In fact, America Rising, a GOP super PAC, is releasing an 112-page e-book attacking Clinton, called Failed Choices, later this week.

Clinton wouldn't say, however, whether she planned to appear before a special Congressional panel convened to investigate the Benghazi attacks.

"I'm not going to say one way or another," Clinton said. "We'll see what they decide to do, how they conduct themselves: Whether this is one more travesty about the loss of four Americans or whether this is in the best tradition of the Congress, an effort to try and figure out what we can do better." 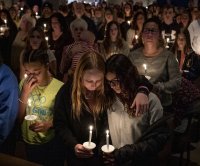 U.S. News // 8 minutes ago
Michigan school shooter was subject of meeting on day of attack, official says
Dec. 3 (UPI) -- The head of the Michigan school district in which a student killed four classmates this week said that the accused shooter was the subject of a disciplinary meeting with his parents just hours before the attack occurred.

U.S. News // 2 hours ago
U.S. added 210,000 jobs in November -- less than half the number expected
Dec. 3 (UPI) -- The U.S. economy added a little more than 200,000 jobs during the month of November, the Labor Department said in its monthly assessment Friday -- roughly half what most analysts expected.

U.S. News // 3 hours ago
Senate passes resolution to avoid shutdown, fund gov't until February
Dec. 3 (UPI) -- President Joe Biden is expected to sign a short-term government funding bill on Friday after the Senate passed the stopgap measure to avoid the threat of a federal shutdown.

U.S. News // 7 hours ago
Police arrest suspect in shooting death of Jacqueline Avant
Dec. 3 (UPI) -- Police in California said they have arrested a 29-year-old man in connection to the fatal shooting of philanthropist Jacqueline Avant.

U.S. News // 9 hours ago
NYC mandates COVID-19 vaccine for nonpublic school employees
Dec. 2 (UPI) -- New York City on Thursday mandated that all workers at yeshivas, Catholic schools and other private schools must receive at least one dose of a COVID-19 vaccine by Dec. 20.

U.S. News // 11 hours ago
U.S., EU hold high-level meeting on countering China
Dec. 2 (UPI) -- The United States and the European Union held their second high-level meeting concerning China as the two sides attempt to foster a united policy to confront and work with the Asian nation amid growing tensions.
Advertisement