Pope Francis on married priests: "The door is always open."

U.S. President Barack Obama meets with Pope Francis at a private audience in his private library at the Vatican. UPI/Stefano Spaziani | License Photo

BETHESDA, Md., June 6 (UPI) -- A group of Catholic and Orthodox theologians is calling on Pope Francis to end the Catholic church's prohibition of married men within the priesthood for members of the faith who practice in Eastern Catholic churches.

Eastern Catholic and Orthodox churches recognize the divine authority of the papacy, but often have different ceremonial practices and cultural traditions. In most of the world, Eastern priests are allowed to wed, but in North America they are not.

In a statement released Friday, The North American Orthodox/Catholic Theological Consultation urged Pope Francis to "[lift the] restrictions regarding the ordination of married men to the priesthood in the Eastern Catholic Churches of North America."

"This action would affirm the ancient and legitimate Eastern Christian tradition and would assure the Orthodox that, in the event of the restoration of full communion between the two churches, the traditions of the Orthodox Church would not be questioned."

If honored, the request made by the consultation would not affect Roman Catholic Priests. However, last month during a press conference the pope expressed an openness to potentially lifting the celibacy doctrine for all priests saying, "The Catholic Church has married priests, no? Greek Catholics, Coptic Catholics, no? They exist."

"Since [priestly celibacy] is not a dogma of faith, the door is always open." 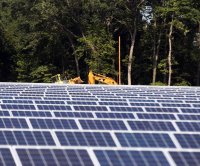