"Well, that's news to me," Annette Bosworth said in response to news she would not be South Dakota's Republican nominee for senate.

"Annette, thank you so much for being here," Kelly began, before cutting herself off. "I want to start with the breaking news from the Associated Press that reports that you lost your race and that former South Dakota governor Mike Rounds has prevailed in the GOP primary."

A visibly shaken Bosworth paused before flatly admitting this was the first she heard of the loss.

"Well, that's news to me. I didn't know that...I didn't know. So, I found out on national television."

After stumbling for a moment, Bosworth regained her composure somewhat and issued a half-hearted regurgitation of GOP electoral talking points.

"You know, Megyn, it's been an amazing race, and it's very important that South Dakota shows the country about getting behind the Republican in South Dakota so that we can get Harry Reid out of...get him kicked to the curb."

The on-air humiliation kicked-off what's likely to be a rough stretch for Bosworth, who was arrested earlier today for 12 felony counts violating local campaign laws.

U.S. News // 14 hours ago
Anti-abortion marchers in D.C. hope 2022 will bring 'a historic change for life'
Jan. 21 (UPI) -- As abortion opponents demonstrated Friday at the annual March for Life rally, some said they hoped "something very big" is on the immediate horizon for their movement. 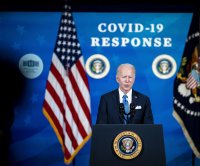 U.S. News // 8 hours ago
Botticelli painting with hidden drawing goes on view in NYC
Jan. 21 (UPI) -- A painting by Italian Renaissance artist Sandro Botticelli -- which was found to have a hidden drawing underneath -- went on view Friday in New York City ahead of its auction.