Grimes broke ranks Thursday when she became the first Democratic Senatorial candidate to release a statement calling for Shinseki to step down. His department faces allegations that 26 VA facilities across the country altered their records to cover up long wait times for veterans. Grimes said it unacceptable for Shinseki to retain his position.

"We owe a solemn obligation to our veterans, and our government defaulted on that contract," she said in her statement. "I don't see how that breach of trust with our veterans can be repaired if the current leadership stays in place."

Another Democratic candidate to call for Shinseki's resignation is Michelle Nunn. She, like Grimes is facing a tough race in the deeply red state of Georgia.

"There is growing evidence that the Department of Veterans Affairs needs new leadership in order to reform its badly broken bureaucracy," Nunn said in a statement to the Atlanta-Journal Constitution.

Other Democrats have made statements calling for Shinseki to act on the problem, but stopped short of calling for him to leave his post.

"He should fix the problem immediately," said Sen. Mary Landrieu, D-La., who also faces a hard race. Sen. Kay Hagan, D-N.C., has said the problems are unacceptable and the administration needs to, "hold accountable those responsible."

President Obama has defended Shinseki and vowed to work with him to solve the problem.

RELATED Obama on VA waiting times: 'It is dishonorable, it is disgraceful, and I will not tolerate it'
RELATED VA health official steps down over scandal
RELATED Senators want 'heads to roll' over Phoenix VA scandal
RELATED Boehner, White House agree Shinseki should stay on at VA

U.S. News // 12 minutes ago
Port of Houston targeted in cyberattack
Sept. 23 (UPI) -- The Port of Houston, one of the largest in the United States, announced Thursday that it was the target of a cyberattack last month. 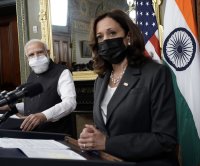 U.S. News // 5 hours ago
U.S. markets rise to green for the week; household net worth hits new record
Sept. 23 (UPI) -- The Dow Jones Industrial Average gained more than 500 points on Thursday as all three major indexes rose into positive territory for the week.

U.S. News // 8 hours ago
Colorado's Lake Powell may not generate hydropower in 2023 due to drought
Sept. 23 (UPI) -- Drought conditions have led to water level decreases in Lake Powell and Lake Mead over recent months.
Advertisement