Obama to nominate Julian Castro to HUD in Cabinet shakeup

San Antonio Mayor Julian Castro's possible move to the Cabinet positions him for a potential place on the 2016 ticket. 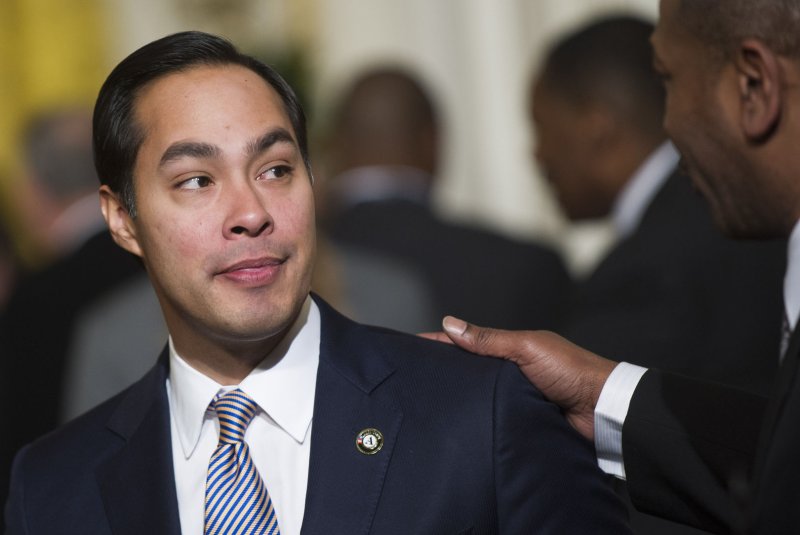 WASHINGTON, May 19 (UPI) -- San Antonio Mayor Julian Castro will be nominated as the next Secretary of Housing and Urban Development, a move that both indicates the Obama administration's confidence in its ability to get nominations through the Senate and one that could have implications for the 2016 presidential campaign.

The Texas Democrat, 39, shot to attention with a lauded keynote speech at the 2012 Democratic National Convention, when the parallels between his splashy entrance into national politics and that of then-Senate candidate Barack Obama in 2004 were well noted.

As one of the party's rising stars, Castro's Hispanic identity and compelling biography as the grandson of Mexican immigrants have put him and his twin brother, Rep. Joaquin Castro, D-Texas, on many Democrats' shortlists as future presidential or vice presidential material.

Immigration is expected to play an outsize role in 2016, as Latino groups have grown angry with President Obama over continued deportations and Republicans have blocked legislative efforts for reform in the name of border security.

While the GOP has several powerful Latinos on their 2016 bench, including Sens. Marco Rubio of Florida, Ted Cruz of Texas and New Mexico Gov. Susanna Martinez, Democrats are less prepared. Both parties have acknowledged an interest in recognizing the growing size and influence of the country's Hispanic population.

Castro had previously rejected administration overtures to join Obama's cabinet: In 2012, he turned down the chance to head the Department of Transportation, and earlier this year said he planned to finish out his term as mayor rather than take a chance to run for governor. He has not yet commented on his change of heart, although former HUD Secretary under President Bill Clinton, Henry Cisneros, said he encouraged him.

"I advised that he accept a position for President Obama," Cisneros said earlier this year. "I thought that if he was going to be vice-presidential material in 2016, then he needed to be more than mayor at that time."

Castro's elevation is the latest move in Cabinet shakeup that began with the resignation of Kathleen Sebelius as head of the Department of Health and Human Services last month. President Obama nominated Office of Management and Budget Director Sylvia Mathews Burwell as Sebelius' replacement, and will nominate current HUD Secretary Shaun Donovan to take Burwell's place.

Burwell was confirmed 96-0 last year to her previous post, and is expected to sail through Senate confirmation despite the Sebelius' rocky tenure. Democrats were able to push through a rule change last year meant to circumvent Republican filibusters that had held up many administration nominees during Obama's first term, instead allowing for Cabinet and judicial picks to be confirmed with a simple majority.

U.S. News // 3 hours ago
U.S. refinery slump leaves oil in storage
Feb. 1 (UPI) -- Refineries in the U.S. south were hobbled by a cold snap in December and inclement weather in Texas in late January.

U.S. News // 5 hours ago
California defies Western neighbors, submits separate Colorado River rescue plan
Feb. 1 (UPI) -- California submitted its own plan to cut water usage from the Colorado River -- defying a proposed deal with the U.S. by six other Western states in a race to save one of the nation's most critical natural resources.