VANCOUVER, British Columbia, May 4 (UPI) -- Despite their reputation as a risk-free and healthy alternative to cigarettes, a new study shows electronic cigarettes also contain carcinogens.

The medical journal Nicotine and Tobacco Research has published a report claiming devices from higher-powered e-cigarettes release formaldehyde, a known carcinogen, into the user's respiratory system. Sometimes at comparable levels to traditional cigarettes.

According to the report, roughly 81 percent of e-cigarette users between 18 and 24 do so with the expectation that the vapor is less harmful and offensive to those around them.

"This study has two alarming findings. First, the risks of e-cigarette use and exposure to vapor are unknown, yet many parents report using these electronic cigarettes to reduce harm to others,” said Dr. Robert C. McMillen, an associate professor at the Social Science Research Center at Mississippi State University and lead author of the report. “Second, half of current users are nonsmokers, suggesting that unlike tobacco harm-reduction products, e-cigarettes contribute to primary nicotine addiction and to renormalization of smoking behaviors."

McMillen and his co-authors are urging the Food and Drug Administration to step up its efforts to regulate the roughly $2 billion-dollar-per year e-cigarette industry and educate the public on the devices' potential health risks.

U.S. News // 2 hours ago
Arizona Senate, Maricopa County end standoff over 2020 election review
Sept. 18 (UPI) -- The Arizona Senate has struck a deal with the board of the state's most populous county after months of jousting over a controversial review of the 2020 election results. 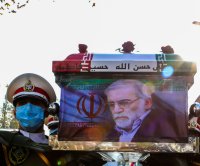 U.S. News // 7 hours ago
California synagogue shooter pleads guilty to federal charges
Sept. 18 (UPI) -- A California man has pleaded guilty in federal court for his deadly attack on a synagogue and attempt to set a mosque on fire.

U.S. News // 11 hours ago
'Justice for J6' rally organizer supports peaceful Jan. 6 participants
Sept. 18 (UPI) -- Matt Braynard, an organizer for the "Justice for J6" rally near the U.S. Capitol drew a distinction Saturday between the Jan. 6 riot participants involved violence and those who peacefully participated. 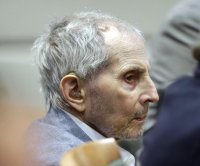